Politico reporter Annie Karni cast objectivity aside Monday in her report on Jared Kushner’s 11-pages of prepared remarks for the Senate Intelligence Committee. In Kushner’s first public explanation of contacts he made with Russian government officials, Karni’s commentary treats Kushner’s guilt as a forgone conclusion and frames his remarks as an endeavor to “downplay” or acquit himself of collusion.

Karni describes Kushner as President Donald Trump’s “powerful son-in-law,” who in his public remarks “attempt[s] to exonerate himself” and “blames” his assistant for the “glaring omissions” on his security clearance forms.

The prepared remarks were framed as Kushner “paint[ing] a picture of himself as a loyal, overworked, under-experienced senior adviser to his father-in-law during a novice campaign that was never staffed up to win.”

Just in case it wasn’t clear for the reader, several paragraphs later Karni reiterates Kushner’s presumed intention to blame his assistant: “As for the confusion about his security clearance forms, he blames the omissions on an assistant.”

“In his opening testimony, he walks through each of his four meetings with the Russians, downplaying all of them to brief, pro forma interactions that lead to no follow-ups” writes Karni.

Reporting as fact Kushner’s “downplaying” of the meetings he had with Russian government officials implies that the meetings contained some hint of illegality or collusion without conclusive evidence. Objective reporting leaves open the possibility that Kushner is telling the truth.

[Kushner] writes of [Russian Ambassador Sergey] Kislyak, with whom he reportedly tried to set up a communications backchannel during the transition. “In fact, on November 9, the day after the election, I could not even remember the name of the Russian Ambassador.”

Trying to prove his point, [Kushner] adds: “when the campaign received an email purporting to be an official note of congratulations from President Putin, I was asked how we could verify it was real. To do so I thought the best way would be to ask the only contact I recalled meeting from the Russian government, which was the Ambassador I had met months earlier, so I sent an email asking Mr. [Dimitri] Simes [the publisher of a foreign policy magazine], “What is the name of the Russian ambassador?” [Emphasis added]

The tone of the article is written in the light cast by the author’s presupposition of guilt, and Kushner can only “try” to weasel his way out of it.

Conversations with foreign officials and business leaders are common during a presidential transition… Mr. Kushner said that his staff members had inadvertently filed an incomplete form, leaving off all foreign contacts — not just Russian ones — as well as other information.

The Times also reports that the reason for concern over Kushner’s meetings with Russian officials is due to his failure to disclose them.

Kushner declared in his public remarks that he did not “collude” with the Russians, nor does he “know of anyone in the campaign who did.”

This report, by Will Ricciardella, was cross posted by arrangement with the Daily Caller News Foundation.

BREAKING: Feds arrest suspect IT staffer for House Dems as he was trying to flee the country
Next Post
U.S. Navy patrol craft fires warning shots at Iranian boat in northern Gulf 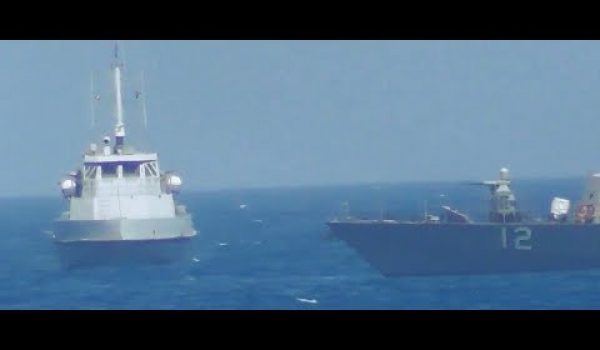