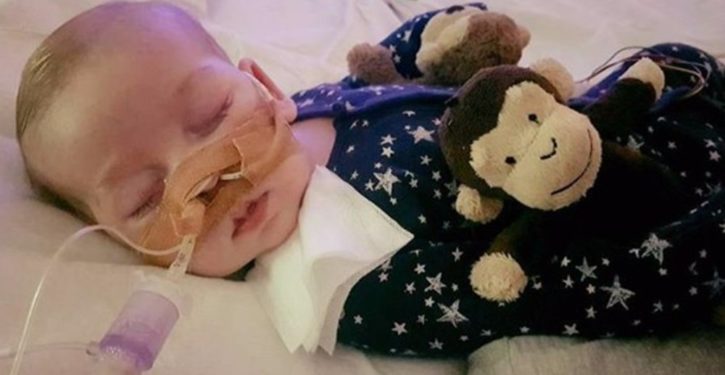 Few things have illustrated as clearly the narrow arrogance of today’s Mark 1 Mod 0 Western mind as the case of little Charlie Gard, the baby whose parents have been fighting in the UK courts for the opportunity have him treated by a specialist in the United States.  (The latest word is that the boy’s parents have given up their legal appeals, and want to take him home to die.)

I am sure that Ian Kennedy, who writes earnestly in the Guardian about Charlie, doesn’t see it as arrogance.  Indeed, I don’t accuse him of arrogance.  Only of shortsightedness, and of being trapped intellectually in circumstances he can’t seem to think outside of – but also of assuming that he must be right in his thinking: that there must be no other way of seeing matters.

There are still Westerners who are not so intellectually trapped, although I don’t think there are that many left in Europe anymore.  Most of them are in the United States now.  It is here that intellectual liberty must not die, if it is to survive for mankind.

Sometimes it seems like a marvel of irony, that the British Isles, which had so much to do with the idea of moral authority and natural rights preceding government, and conferring on it its charter, should have become so complacent about government being the standard and arbiter of all things.

In his argument for why Charlie Gard’s fate must be dictated by the British courts, Kennedy takes government authority as so axiomatic that he doesn’t even bother to distinguish what kinds of matters we ought to cede such authority in.  And that, apparently, is because he makes no such distinction in his own mind.  The authority of government over human life is itself a first principle, so inviolable that everything else must yield to it.

The most famous words from his essay will undoubtedly be the ones in the headline:

Now, in giving effect to a child’s rights, the parents’ views as to their children’s interests should usually be respected. But parents cannot always be the ultimate arbiters of their children’s interests. If parents, for example, insist on subjecting their child to a particular diet that, in the view of others with acknowledged expertise in the subject, will cause the child harm, we do not stand by. We intervene to safeguard the child.

But if we hope to make headway against the encroaching idea of government omniscience and universal authority, we have to do more than be indignant about the freighted passages here.  We have to recognize that there is a principle behind Kennedy’s reference to “safeguarding the child” – and that the principle has priority over the idea of government authority.

That principle is not that someone other than parents must have the armed power of the state to overrule the parents, in case you and I disagree with them on their choices.

The principle is that, if it is to intervene at all in such cases, a government must err on the side of life.

We can agree because it’s precisely the point.  Government has a role in society, but it is properly a limited role, and one suited to its nature.  Government is not something whose authority we sign up for as if signing a blank check.  We don’t want to just hand our future expectations over to government, nor are we wise to.

The purpose of government is essentially one of enforcement, and when it’s functioning as it should, it is reasonably good at that.  But the role and nature of enforcement are not suited to every issue that comes up in human life.

One of the issues enforcement is least suited to is being an arbiter of long-shot hopes, about individual survival or anything else.  The whole premise of enforcement is dismissing long shots in favor of statistical “certainties.”  Try treating every criminal as a long-shot hope for sudden reform, and see how much enforcement you get on that basis.  The people wanting safety in their homes and streets would think pretty poorly of the job you were doing.

Government can’t decide everything for us, because government itself has a nature that cannot be altered.  We must pick and choose what we let government handle on our behalf.

Ian Kennedy’s example of a court intervention we would probably approve of makes this point very well.  He writes of a case in New Zealand:

A boy had suffered a catastrophic injury while being operated on: his neck had been broken. Though alert and talkative, he was paralysed. His parents had told his doctors that they wanted care to be withdrawn (he was on a ventilator) so that he could die peacefully. He wasn’t terminally ill, but they thought it best given what the future would hold.

There was no precedent in New Zealand. My advice was that the parents’ views were not the last word; the lawyers should go to court, ensure that the child was separately represented by a lawyer, and that the only question for the court was what was in the child’s best interests. The advice was followed. The child was made a ward of court, was cared for and lived on.

The approval most people instinctively have here is not for the government intervention itself, but for the intervention on the side of life.  The idea of a public authority overriding the parents is predicated on the authority siding with life over death.

Government authority is not and should not be absolute, or all-encompassing.  We do confer on government the authority to take life, or rule against life – for some purposes and in some roles, but not all.  We accept that national defense and law enforcement will sometimes require the taking of life, and so we hedge these powers about with mechanisms for accountability and due process.

The central problem of “national health care” systems is that under them, government cannot be kept on a short tether in that regard.  The very premise of Britain’s NHS requires ceding too much power to side against life, not to hospitals, per se, but to the government.

It matters to the scope of its proper authority how government rules on questions of life or death.  There are large segments of human life in which government should not have the final say.  If life needs a champion, and the family or church is not providing it, government may need to step in.  But it must not be in the charter of the armed enforcement wing of society – government – to step in and rule on when anyone must be left to die.

Yes, that means that collective schemes by which we are forced, by government, to routinely and comprehensively pay for other people’s health and survival are a bad idea.  It means the premise of “national health care” is flawed, and can never lead anywhere but to the point of a court ruling – well outside the purview of its proper role – that Charlie Gard’s parents must give up hope.

Where the government and the voters have a monetary stake, we assume that they will have a veto.  Eventually, if we swallow the Charlie Gard outcome, it will lead to people voting on when other people have to die for convenience’s sake.  The wrong idea of what government ought to do will fatally distort our relations with each other throughout society.

These truths are not unthinkable.  They never were.  They were not just foreseeable; they were foreseen.  They are the very stuff of both moral humility and moral maturity; among the most important insights the Judeo-Christian West has had, and many centuries in the refining.  They just haven’t been thought for eighty or a hundred years, at least not by the publics in most of Europe (and now, sadly, in the United States as well).

Obama holdovers at State scrubbing references to ISIS ‘genocide’; blocking aid funds to Christians
Next Post
BREAKING: Feds arrest suspect IT staffer for House Dems as he was trying to flee the country