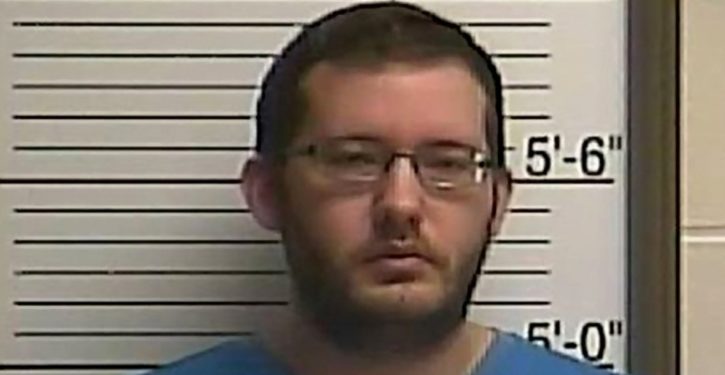 An Indiana church that prides itself on being inclusive is the latest setting for a hoax that is now being treated as a crime.

St. David’s Church in Bean Blossom was adorned shortly after the presidential election with graffiti that appeared to come from the hand of neo-Nazis or white supremacists. One of the ugly spray-painted messages read “Heil Trump,” while another was a depiction of a swastika.

It turns out, however, that the hate-filled messages were the work of the church organist.

According to NBC affiliate WTHR:

Stang, who is gay, is the individual who claims to have originally discovered the graffiti. In his statement to police, Stang confessed to painting the graffiti because he wanted to “mobilize a movement after being disappointed in and fearful of the outcome of the national election.” He insisted his actions were not motivated by anti-Christian or anti-gay sentiments, writing:

I suppose I wanted to give local people a reason to fight for good, even if it was a false flag. To be clear my actions were not motivated by hate for the church or its congregation. I of course realize now, this was NOT the way to go about inspiring activism.

If convicted, Stang could face a year in prison and be fined up to $5,000.

Although the church had no comment on the organist’s arrest, Episcopal Diocese of Indianapolis Bishop Jennifer Baskerville-Burrows issued a statement about the vandalism that reafds:

I was saddened to learn this morning that the vandalism of St. David’s Church in Bean Blossom was committed by the church’s organist, Nathan Stang, who has admitted to police that he spray painted hateful graffiti on the church last November in the wake of the presidential election. This was a hurtful, dishonest, and profoundly misguided action that stands against the values of the people of this diocese and the Episcopal Church, and we will continue to cooperate with the authorities who are pursuing this case.

Hoaxes in which houses of worship are vandalized or worse by parishioners has become widespread in the era of Donald Trump as president. A Mississippi church was largely destroyed by fire last November set by a member of the congregation who also spray-painted “Vote Trump” on the exterior of the building.