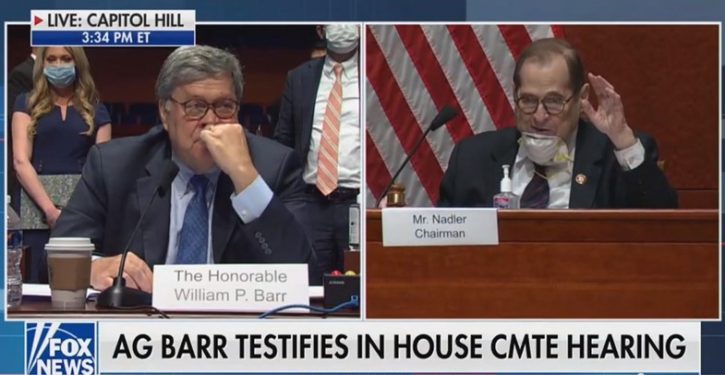 Americans got a pretty fair taste of the Democrats’ curious notion of what it means to hold power during the impeachment fiasco. We watched day in and day out as House Intelligence Committee Chairman Adam Schiff handed down one bug-eyed diktat after another, each time officiously banging his gavel.

You’d think that spectacle would have provided a primer course for viewing Attorney General William Barr’s testimony  before the House Judiciary Committee on the riots that have become the new normal in America’s cities and the Justice Department’s response. You’d be wrong. From the moment the hearings began, it was clear that Committee Chairman Jerrold Nadler and his Democratic colleagues intended to treat Barr as “a hostile witness.”

This was best exemplified by the exchange that followed Barr’s request for a five-minute break out three hours into the grilling. Watch. A transcript follows.

Barr: Could we take a five-minute break, Mr. Chairman?

Barr: I waited 45 — an hour for you this morning. I haven’t had lunch. I’d like to take a five-minute break.

Nadler: Mr. Attorney General, we are almost finished. We are going to be finished in a few minutes. We can certainly take a break but —

Nadler: After this if you still —

Ranking Republican Committee Member Jim Jordan: He wants a break now, and you just mentioned rudeness, I think we’re seeing it on display. Let’s let the Attorney General have a break.

Nadler: The committee will stand in recess now.

It turns out that exchange with Rep. Madeleine Dean (D-Pa.) would be another spectacle unto itself. Her badgering of the attorney general over his insistence in calling the violent outbreaks riots instead of protests, her preference, seems to miss the point that the question of whether these events are riots or protests is what the AG is there to resolve.

AG Barr: "When people resist law enforcement they’re not peaceful."@RepDean: "I’m surprised at your lack of respect for a member of Congress." pic.twitter.com/GKEsZ7SyEk

On the dossier: Yes, it was salacious, unverified fiction. Reality all along was what Obama, Clinton cabals were doing
Next Post
Swing voters in Michigan focus group say they are voting for Trump, call Biden a ‘puppet’