Can you remember back to the presidential campaign? Do you remember how, after the DNC emails began leaking, Democrats told us that they’d been hacked by the Russians? Do you remember how the DNC came to learn this? It was through a tech company called CrowdStrike hired by the DNC. The founder of CrowdStrike has very close ties to the Obama White House, is friends with Hillary Clinton, and is connected closely to Ukranian oligarch Victor Pinchuk (who is quite chummy with the Democratic Party).

Here’s the problem with this: CrowdStrike’s reputation is currently unraveling. Why? It seems that CrowdStrike is as politically motivated as everyone else in Washington, D.C. The company is itself an opponent of Vladimir Putin and Russia and was recently caught fabricating a report that attempted to blame Russian hacking for problems with Urkainian military technology.

CrowdStrike has retracted statements it used to buttress claims of Russian hacking https://t.co/8AZOvoQl0K

Yes, you read that correctly. CrowdStrike was forced to retract portions of a report that blamed Russian hacking for problems that didn’t actually exist. This realization completely undermines any reason we have to trust their analysis of the DNC servers. Since the DNC refused to allow the FBI access, we only have CrowdStrike’s word that the Russians hacked the DNC. Now that we know CrowdStrike has been caught lying about Russian hacking in another instance, we simply cannot give them the benefit of the doubt on the DNC email leak.

ZeroHedge‘s Tyler Durden has done some solid reporting on CrowdStrike and its efforts to help the DNC win the election and undermine President Trump.

As I’ve been saying for months, there is no evidence that the Russians hacked the DNC: none, zilch, nada. Yet this false narrative is the entire basis of a campaign launched by the Democrats, hailed by the Trump-hating media, and fully endorsed by the FBI and the CIA, the purpose of which is to “prove” that Trump is “Putin’s puppet,” as Hillary Clinton put it. Now the investigative powers of the federal government are being deployed to confirm that the Trump campaign “colluded” with the Kremlin in an act the evidence for which is collapsing.

This whole affair is a vicious fraud. If there is any justice in this world – and there may not be – the perpetrators should be charged, tried, and jailed. 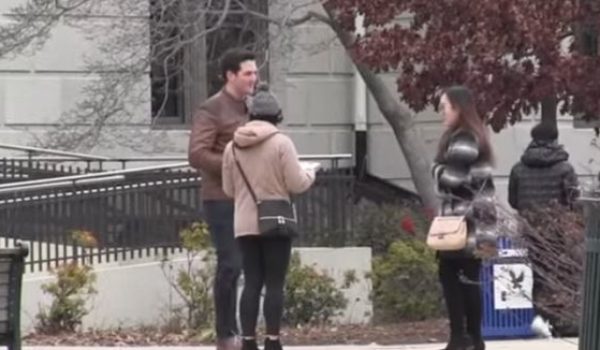 Students at American U. (that’s AMERICAN U.) sign petition to ban hiring of profs who support Trump
Next Post
Justice denied: Student victimized by ‘Mattress Girl’ loses in court again