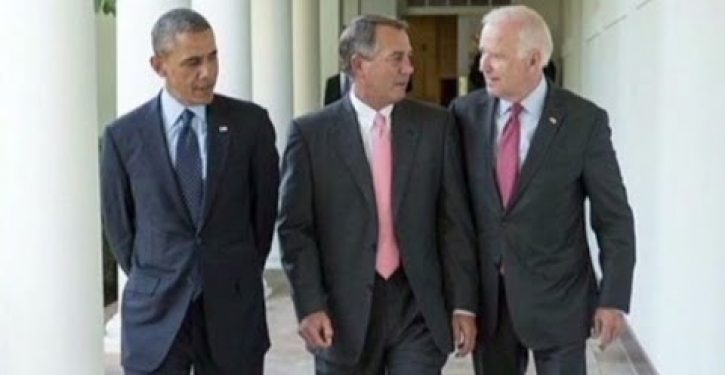 When Speaker John Boehner, R-Ohio, confirmed Wednesday that the House of Representatives would be filing a lawsuit in July naming President Barack Obama as defendant, the Democratic Party went into full panic mode.

While the speaker was consulting legal scholars about the possibility of a lawsuit, the president ironically referred to Boehner as one of his “favorite golfing buddies” according to CNN. That would soon change.

Boehner made his intentions official Wednesday morning in a memo directed to House Republicans, in which he laid out the legal basis for the suit — the president’s failure to faithfully execute the laws of the United States as provided by Article II, Section III of the U.S. Constitution.

Later that day, he made it all public during a press briefing. Watch the briefing below via The Associated Press.

“They are doing nothing here so they have to give some aura of activity,” she said, according to Politico.

But the most intense reaction came from the House Majority PAC, which sent out emails to the party faithful claiming that the lawsuit is an example of the speaker caving in to right-wing extremists.

George – This is ridiculous: Speaker Boehner has caved in to pressure from his extreme, Right wing caucus and will be using taxpayer dollars to SUE President Obama!

He is willing to waste our taxpayer dollars on a frivolous lawsuit, after consistently preaching about how Republicans don’t like to waste taxpayer money!

Boehner has sunk to a new low — just another reason why we’ve got to elect a Democratic majority. It is time to fight back and kick Boehner out of the Speaker’s chair.

We can’t do it without you though. We need to SURGE past our FEC deadline in just a few days if we want to fight back.

First of all, the speaker has never “caved in to pressure from his extreme, Right wing caucus.” Speaking as a conservative, there have been many occasions when I wish he had caved, but it never came to pass.

Second is the question of how best to combat the president’s pen and phone, which he’s used to initiate gun control, immigration reform, substantively modify Obamacare and add new rules governing climate change — all without consulting Congress.

Rumors have been circulating around Capitol Hill about bringing impeachment proceedings against Obama. There’s no question but that the House has the votes to impeach, but impeachment is followed up by the trial phase — that takes place in the Senate and would go nowhere.

Enter the lawsuit — an unusual and elegant solution to a vexing problem that won’t go away on its own.

“I think there is a case against the president for exceeding his authority,” he said, according to MSNBC. “I happen to agree with the president on many of his priorities and policies, but as I testified in Congress, I think he has crossed the constitutional line.”

“Well, when the president went to Congress and said that he was going to go it alone, it obviously raises a concern,” he said. “Because there’s no license for going it alone in our system.”

The House Majority PAC email closed with a request for contributions and is signed by the “Democratic Rapid Response Team.” Maybe money is the actual root cause of their panic.