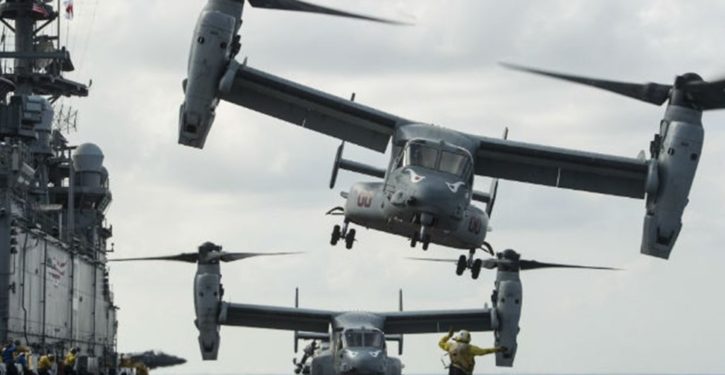 Breaking news this evening (8 March) is that U.S. Marines have been deployed into Syria to provide artillery support for the battle against ISIS in Raqqa, the city in northern Syria that has served as the guerrilla-terrorists’ capital and stronghold for more than four years.

Few details have been released as yet about this force deployment.  It is clearly part of a major push to ramp up the fight against ISIS in Syria – a push of unprecedented scope and combat momentum.  Heretofore, U.S. troops have operated in Syria in small numbers, and without concentration of force.  In the last few days, 100 Army Rangers have inserted into Syria, and the Marine deployment ratchets the level and nature of U.S. involvement up significantly.

U.S. officials quoted in the reporting this evening are comparing it to elements of U.S. support to the battle of Mosul in Iraq.  The deployed force is an artillery unit from the 11th Marine Expeditionary Unit (MEU) embarked in the USS Makin Island (LHD-8) amphibious ready group (ARG).  11 MEU’s Battalion Landing Team (BLT), 1st Battalion 4th Marines, will man the guns.

In 2016, “several hundred” Marines were deployed in the artillery support role for Mosul, where the infantry fighting was done by a combination of Kurds, Iraqi national forces, and Iran-backed Iraqi “militia” units.  No statement has been made of the number of Marines being moved to Syria, but it is presumably comparable.  The artillery battery and infantrymen combined probably comprise some 300-350 Marines.  The infantry fighting will be done by a locally sourced force, as in Mosul, in which the Kurds are likely to figure prominently again.

The Rangers are reported to be in Manbij, which is not in the vicinity of Raqqa, but lies some 70-80 miles northwest of it.  It will take a little time to decipher what the overall operational plan is.  The good news, with the change of presidents in Washington, is that now we can at least assume there is one.

USS Makin Island (the aircraft-carrying command ship of the ARG) has been in the Arabian Sea in the past week, and is not in the Mediterranean.  Presumably, the Marines were transported to Syria by air, with Jordan being the likely waypoint.

That said, Makin Island is reaching the end of her Middle East deployment.  She and her ARG/MEU left San Diego in October 2016, and are unlikely to be held on station for extended ops in Syria.

USS Bataan (LHD-5) ARG, with the 24 MEU embarked, left the East coast 1 March, and has just arrived at the western edge of the Mediterranean Sea.  It looks probable that at some point the MEUs will swap out, assuming the fire support mission in Syria continues beyond the next couple of weeks.  The timing, with an ARG/MEU turnover, also affords two complete sets of expeditionary combat power to deal with emergent tasking, whether Syria spirals upward or something else erupts between the Strait of Gibraltar and the Indian Ocean.

With Marines and Rangers on the ground in significant numbers, dedicated combat air support is essential.  USS George H W Bush (CVN-77) is currently operating in the Eastern Med, and will presumably form the backbone of such support.

But Raqqa is centrally located for air support from multiple vectors.  The Air Force is in the game there, even if it can’t use Incirlik in Turkey (and there hasn’t been word on that, from what I can find).  USAF strike-fighters could operate from Mediterranean bases, potentially using Crete or Cyprus for ground support, and potentially Jordan as well.  Those options would depend on what we have worked out with the host governments, because the infrastructure already exists.  The Air Force could also operate from Qatar and Kuwait, potentially using Jordan or even Iraq for mission ground support as necessary.

There are serious questions with this development: a ramp-up in Syria.  The most serious for me is why it is being done without a policy statement from the president.  Obama deployed forces repeatedly without presidential policy statements – something to outline U.S. interests and objectives, the bona fides the people are entitled to – and I am concerned to see that bad trend being continued.

People have forgotten in the last eight years that statements of policy about why we’re deploying force, and what we hope to accomplish, are simply what we should expect.  Even if you didn’t like everything previous presidents were doing, they hewed to the standard of giving national-policy explanations.  This was the case for every post-World War II president from Truman to George W. Bush.  We need to get back to taking it that seriously when our fighting men and women are deployed.  They are not a police force, and Syria is not our territory.  We don’t sling armed force around as if it’s just another day and another street corner.

Maybe we’ll get a presidential statement in the next day or so.  Meanwhile, we’re also entitled to ask whether we have the ready resources to accomplish this mission properly.  I respect our military leadership and believe that they’ve taken that into account.  But the American people are owed that confirmation, after so many years of declining military readiness.

We’ve been backed, over the last eight years, into a dangerous practice of just moving troops and hardware around from one country to another as if it’s no big deal.  But it is a big deal, and nothing about the Syria situation demands special silence about it at the political level.  In fact, the situation itself would be extremely well served by the refreshment of a watershed policy statement.  It’s way past time to talk about what our interests are in Syria, and what we want there.

We’ll see what comes out in the days ahead.  All that said, it is a relief to observe a deployment going on, and at least be able to assume that it has some operational sense behind it.  It’s been a long time.

Arrests made in New York’s ‘Day Without Women’ protest
Next Post
Game change: U.S. officials say they knew of CIA leak – and WikiLeaks docs are real