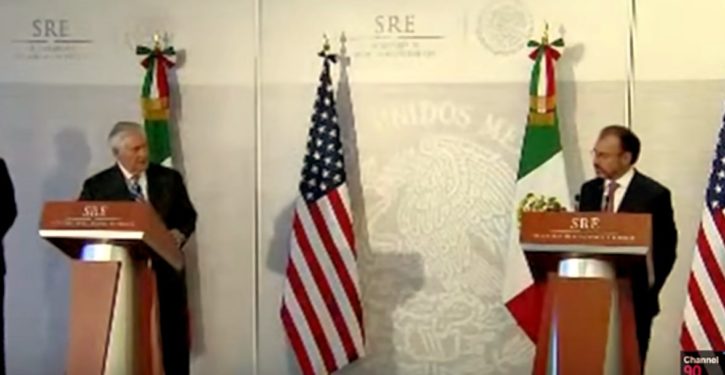 Just before a meeting with U.S. officials this week — a meeting described by the media as “chilly” — Mexican Foreign Minister Luis Videgaray said Mexico would go to the UN for help in defending “human rights,” if the U.S. makes good on President Trump’s vow to enforce American immigration laws.

CNSNews’s Susan Jones describes the event, at which Mexico signed a cooperation agreement with the office of the UN Human Rights Commissioner:

Speaking on the eve of Thursday’s meetings with Secretary of State Rex Tillerson and Homeland Security Secretary John Kelly, Secretary of Foreign Affairs Luis Videgaray said at a meeting with officials from the U.N. human rights office that Mexico “does not have to accept provisions that one government wants unilaterally to impose on another.”

“The government of Mexico will act by all means legally possible to defend the human rights of Mexicans abroad, particularly in the United States,” he said.

“The government will not hesitate to go to international organizations beginning with the United Nations to defend, in accordance with international law, human rights, freedoms and due process in favor of Mexicans abroad,” Videgaray added.

One of Mexico’s chief concerns is that the Trump administration will deport third-country migrants to Mexico — because Mexico in many cases actually facilitates their passage through Mexican territory to the United States.  Many of the migrants come from Central America:

The reference to Central America likely relates to a specific provision in a memorandum by Kelly this week indicating that the U.S. may deport to Mexico citizens of other countries who had reached the U.S. by crossing Mexican territory.

The DHS said aliens could be returned “to the foreign contiguous territory from which they arrived,” as doing so would free up DHS detention and adjudication resources for other priority aliens.

Mexico understandably doesn’t want to be inconvenienced in this way.  Interestingly, Mexico demonstrated its own commitment to human rights in January, by deporting Cubans fleeing the Castro regime for the first time in recent history, after Obama ended the longstanding U.S. policy of accepting fleeing Cubans who came through Mexico.

But not all the illegal migrants come from Central America.  Many have come in recent years from Africa (including a significant number from terrorism-threat country Somalia), and Mexico has been facilitating their passage to the U.S. border as well.

According to Mexico’s El Universal African migrants have been entering Mexico and almost immediately turning themselves in to agents with the National Immigration Institute (INM).

Once in custody, the migrants receive a special 20 day pass that gives them the freedom to move about the country. The purpose of the pass is to allow them to get to the U.S. border. According to El Universal, INM issues the permit to individuals from countries that Mexico does not have diplomatic relations with. The permit makes it easier for the INM to have the migrants leave the country voluntarily than to deport them to their countries of origin.

Mexico doesn’t simply open up its southern border to migrants, however.  It puts a lot of resources into preventing their entry, and turning them back.  Such was Mexico’s commitment to human rights, in fact, that in 2015, the Mexican government was deporting more people back to Central America than the U.S. was.  The “Washington Office on Latin America” think tank expressed concern at the time that the Mexican authorities were deporting migrants too quickly:

“What we have heard continuously in the past year is that migrants are being so rapidly deported that even some that might have wanted to request some type of protection, or who would have been eligible for some type of humanitarian visa because they had been victims of crime in Mexico, haven’t had that opportunity,” Meyer said.

The U.S. had granted nearly half of the more than 49,000 requests for asylum in the previous year.  But Mexico’s record was much stingier:

Mexico grants only a tiny number of asylum requests. The latest figures, covering a nine-month period from January to September 2014, show only 1,525 people, the majority of them Central Americans, requested asylum or refugee status, and only one-sixth – 247 – were granted.

Of course, accusing the United States of not honoring human rights isn’t about human rights, or about truth.  It’s pretty much always about political opportunism.

You can’t blame Mexico for not wanting a lot of new problems dumped at its door.  But Mexico has benefited for years from being able to pass along problems to America, because of the refusal of both Democrats and Republicans to enforce American law.  It’s an American president’s prerogative to change that.  The U.S. doesn’t have a “human rights” obligation to be less sovereign over our territory than Mexico is over Mexico’s.

The US. delegation to Mexico City this week did discuss with their counterparts a proposal that might help get us all out of this jam.  Per Susan Jones, the general outline of it is for the two northern nations to partner in stabilizing and improving conditions in Central America.

[A] communique after the meetings…said the interlocutors had agreed that the two governments had a shared responsibility to confront the issue, “with an approach that is not limited to migratory control, but that addresses the true causes of this phenomenon as the development and stability of the region and Central America.”

That seems like a positive step.  It’s more sustainable and imaginative than continuing to pretend that “human rights” depend on the U.S. being the hemisphere’s biggest immigration patsy — which fortunately Donald Trump does not want to do. 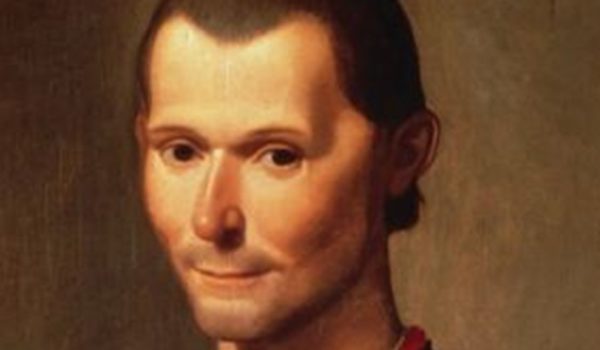