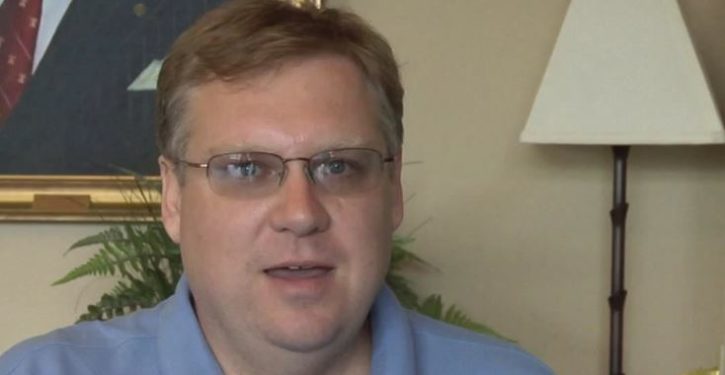 President Donald Trump’s White House staff may be longing for the random acts of vandalism committed against the early George W. Bush team by the Clinton White House staff in 2001, which included the removal of the “W” key from many White House computer keyboards.

Instead, today, a subversive alt-government is emerging, in line with the alt-Left’s growing resistance to use any means necessary to slow, stop, and obstruct Trump’s agenda, from inside the government. If successful, the ultimate effect of the movement will make America ungovernable.

J. Christian Adams, a lawyer and the author of “Injustice,” has witnessed ideological battles inside the Department of Justice. Employed by the Justice Department during the 2008 general elections, he was an open critic of the Obama Administration’s decision to halt the civil case against members of the New Black Panther Party who had stood outside a Philadelphia polling place on Election Day, menacing voters with billy clubs.

In an exclusive interview with The Daily Caller News Foundation, Adams condemns today’s even more intolerant Left, with its violence, fire, riots and “totalitarian tendencies,” daring to label others as fascists or Nazis.

He says it’s a tactic used to scare and conjure up horrors against their enemies. Adams says that use of such labels, is an Orwellian corruption of the language, showing how far the left has sunk in its hatred of America.

The “civil service has been radicalized and is an instrument of the institutional left,” he says, mentioning immigration, open borders, green energy, labor policy for unions, and more. He says, with the power and protections of civil service employment, these bureaucrats are poised to impose their own ideological will through the administrative state, despite Trump’s victory at the ballot box.

As for the ideologically-hostile bureaucrats left in place from the Obama administration, Adams says “there are not enough Donald Trumps in the administration.”

He chides the initial Trump teams for not taking bolder action after Jan. 20. Awaiting the Senate confirmation of Attorney General Jeff Sessions, Sally Yates, the first acting attorney general who voiced objection to an early presidential action before she was fired two hours later, should not have been left in that position, he says. No other Republican though, he says, would have had the courage to fire Yates so summarily either.

There’s a lot more Sally Yates [sic] in the Justice Department just waiting to sabotage the next policy initiative of the President or the attorney general.

If Trump doesn’t take on the alt-government, he will face four years of escalating sabotage, Adams says.

His recommendations to Trump include removing or transferring large numbers of the federal Senior Executive Service (SES) managers. Additionally, a large reduction in force of federal employees could help, he thinks, but that takes more courage by the Congress.

For context, radio host and author Dennis Prager has deemed what is happening against our new president as a new American civil war. These alt-government tactics, joined with escalating anti-Trump street protests, boycotts, orchestrated congressional obstructionism, and slowdowns by Democrats surpass protests of yesteryears.

Previous resistance efforts were designed to irritate and draw attention to a cause. Yet, since Election Day, the array of third-world revolutionary tactics unfolding throughout the culture, Congress, and the media, along with mass manipulation and name calling, are designed to overturn the voters’ choice and punish and destroy the opposition.

Adams mentions the new portal, SecureDrop, by the Washington Post, to encourage leaks for whistleblowers. In addition, the ethics offices are often ideologically driven, holding Republicans to higher standards than the last administration, he adds.