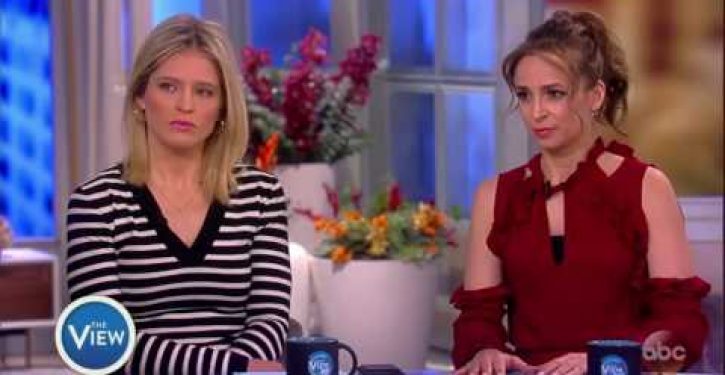 Co-host of “The View” Whoopi Goldberg attempted on Tuesday to compare and contrast (mainly compare) the fledgling administration of Donald Trump with the Taliban. Never mind that it’s the sort of analogy that sent the Left into a rage when the target was Barack Obama.

In the video, which follows, Goldberg posits:

We have had a leader who’s repeatedly demeaned women, wants to defund organizations that benefit women, callin’ on the media to shut up, specifically wants to give preferential treatment based on religion. Are these values really much different than the Taliban’s?

If you’re saying to the media shut up — that’s what [the Taliban] do. Maybe they didn’t start out choppin’ people’s heads off, maybe they started out differently.Because we’re saying to people, here are our American values, and then we’re saying on the same token stuff that sounds exactly like the stuff we’re fighting.

The comment was greeted by applause from the studio audience.

It would be easy enough to take Goldberg’s “arguments” one at a time and demonstrate how they apply to Trump’s predecessor (Obama went much farther than just “callin’ on the media to shut up,” as Fox News’s James Rosen can attest) or have been spun to comport with her liberal world view. Her comment about defunding “organizations that benefit women,” for example, is obviously a reference to Planned Parenthood, which the new president has spoken of defunding because of its stance on abortion, especially the disposition of aborted fetuses.

Some outlets (think The Hill) have reported Goldberg’s remarks without comment or criticism. Others, including the much-in-the-headlines blogger Milo Yiannopoulos, pointed out the error of Goldberg’s ways.

An especially lengthy disquisition on the subject was featured on yesterday’s “The Five” on Fox News (beginning at 29:14 in the video that follows). After the five conservative co-hosts take turns dissecting the comparison, Juan Williams, the lone liberal on the panel, shares his thoughts, which are actually dumber than Goldberg’s comments. The fun starts at 31:57:

I just want to say that what Whoopi said has some merit to it. It was a powerful analogy. It’s got all of us talking.

Muslim Brotherhood spending $5 million on PR campaign in U.S.
Next Post
Cartoon of the Day: Blessings from on high 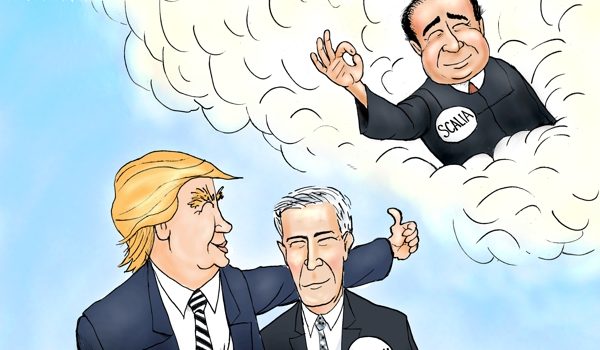