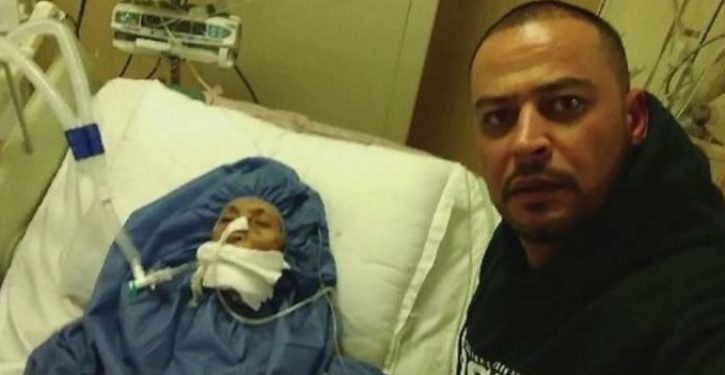 It is slowly but surely became the credo of Democrats and liberals hellbent on proving how pernicious GOP policies are: If you can’t find an actual example, invent one. Spray paint the words “Vote Trump” on your own black church, then set the building on fire. Falsely claim you were attacked by Islamophobes who were intolerant of your hijab, and hope no one’s any the wiser.

The problem for liberal hoaxers is that the truth always seems to come out. It has happened again in the case of a Detroit man who claimed his mother died in Iraq because of Donald Trump’s temporary immigration ban.

On Tuesday, Mike Hager told reporters with Fox affiliate WJBK that he and his family were detained while trying to return from Iraq to Michigan on Saturday. Hager said that he was allowed through because of his American citizenship, but his ailing mother and other family members were not. Ultimately, he said, his mother died before reaching home.

The story went viral, and the outrage was palpable. But the story was lie, and Hager’s own cleric blew the whistle on him:

Imam Husham Al-Hussainy, leader of the Karbalaa Islamic Educational Center in Dearborn, says Mike Hager’s mom did not pass away this weekend after being barred from traveling to the United States. The Imam confirms that Hager’s mother died before the ban was put in place…. “She did die but that was a couple weeks ago — before the ban.”

When confronted about his lie via text, Hager wrote “Since I lost my mom Ii’ve [sic] been on heavy medication — I can’t even sleep. I did not make anything up.”

He is also distraught because his dog ate his homework.

A different Super Bowl matchup: Politics vs. the NFL
Next Post
Kuwait bans visas for 5 Muslim-majority countries, including Pakistan