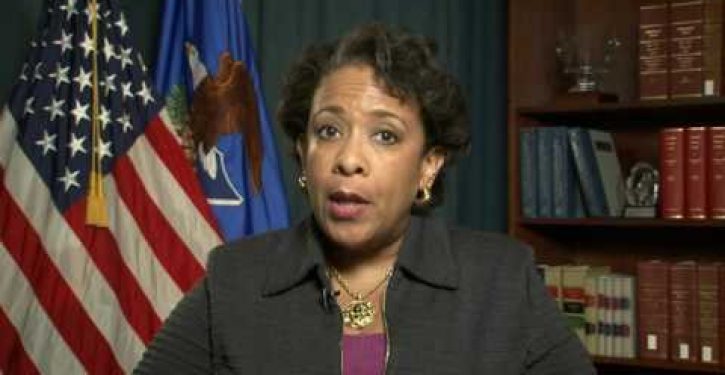 I can certainly appreciate why liberals are so anxious about a Justice Department overseen by a “racist” like Jeff Sessions. It’s highly unlike that the new attorney general will follow in the footsteps of Loretta Lynch or her predecessor, Eric Holder.

Lynch has vowed in her waning days as AG to investigate reports of harassment that have occurred in the aftermath of last week’s presidential election. In a video statement released by the Justice Department Friday, Lynch explained that the probe is designed not only to mete out justice but to determine “whether particular incidents constitute violations of federal law” and are therefore subject to hate crime enhancements.

If this sounds too  good to be true coming from an Obama-era AG, that’s because it is. As Lynch notess in her comment, which follows:

We still have a long way to go to ensure that every American can live free from the fear of violence or harassment based what they look like, how they worship, or whom they love.

In case you haven’t yet figured it out, she’s not seeking to prosecute people like the black mob in Chicago who pummeled a white motorist they assumed had voted for Trump or the Hillary Clinton supporters who issued death threats to members of the Electoral College. Then again “civil rights” groups like the Southern Poverty Law Center or CAIR aren’t interested in justice for whitey.

Those are two of the outfits that have referred cases to Lynch for review. The Advocate, a pro-LGBT publication, reports that the SPLC has referred “437 reported acts of verbal and physical harassment” to Lynch’s office. CAIR, for its part, notes merely a “troubling Islamophobic trend” following Trump’s nomination of Sessions and of Rep. Mike Pompeo to CIA director. How much of a “trend” could there be following an announcement made yesterday? Apparently, we bigots work fast.

Barack Obama spent much of the past eight years bellyaching about equality and justice, insisting that all Americans deserve the same treatment under the law. Thanks to the will of the American people, he is about to get his wish.