Hunter Biden has not confirmed nor denied that he dropped off a laptop at a Delaware computer repair shop that has been described as the source for emails detailing his business dealings in Ukraine and China.

He has also not addressed the authenticity of a quote the New York Post produced on Wednesday from the repair show that contains what appears to be his signature, along with his phone number and email address, agreeing to allow the shop to attempt to move data from three Macbook Pros to a store server.

If Hunter Biden was not the individual who dropped off the laptop at the repair shop in April 2019 or the signed quote produced by the Post is a forgery, it would cast doubt on the legitimacy of the emails that were pulled from the computer or point to the possibility that the emails were obtained from a hack or other illegal means.

Hunter Biden’s lawyer, George Mesires, has not responded to numerous emails, phone calls, and text messages from the Daily Caller News Foundation asking whether the repair shop quote with what appears to be his client’s signature is a forgery or whether his client can confirm whether or not he dropped the laptops off at The Mac Shop in Wilmington, Delaware, in April 2019.

Mesires also did not respond when asked to confirm the legitimacy of an email produced by former Fox News reporter Adam Housley showing that he had contacted the owner of the repair shop, John Paul Mac Isaac, on Tuesday evening inquiring about Hunter Biden’s laptops.

Here ya go….this is the email sent to John Paul by Hunter Biden's lawyer. It is in reference to returning the laptops. Also…the attorney said Hunter dropped em off in 2017. Nope..try April 2019. He didn't even know when he left em there. Redactions on this document are mine https://t.co/QszglOJV1d pic.twitter.com/VvEguJ0Cec

Hunter Biden has also not denied the authenticity of the emails being reported by the Post. The DCNF has not independently verified the messages.

The Post reported Wednesday that Mac Isaac did not positively identify the individual who dropped off the laptops in April 2019 as Hunter Biden but did note the computer contained a sticker of the Beau Biden Foundation. Mac Isaac then told Delaware Online that the customer identified himself as Hunter Biden when he arrived at the shop with three liquid-damaged laptops in April 2019, leaving only one at the shop for repair.

According to Mac Isaac, the customer who dropped the computer off for service never came back to pay the bill or retrieve the laptop. The repair quote produced by the Post states that equipment left with the shop “after 90 days of notification of completed service will be treated as abandoned.”

Mac Isaac later alerted the FBI about the existence of the laptop after it went unclaimed. Before federal authorities seized the computer, he made a copy of its hard drive and turned it over to a lawyer for former New York Mayor Rudy Giuliani, according to the Post.

Giuliani then provided a copy of the computers hard drive to the Post, which has been used as the basis for stories published last week, one of which detailed how Hunter Biden allegedly introduced an executive for Burisma to then-Vice President Joe Biden in 2015 and another showing how Hunter Biden allegedly pursued a lucrative business deal with a Chinese energy company on behalf of his family in 2017.

Joe Biden’s presidential campaign said the alleged meeting described in the email between him, his son and the Burisma executive never took place.

Joe Biden told CBS News Reporter Bo Erickson he had “no response” when asked about the Post’s stories about his son’s alleged emails on Friday evening.

Giuliani rejected the notion that hackers were involved in the dissemination of Hunter’s alleged emails. The former New York mayor told SiriusXM on Thursday that Mac Isaac obtained “legal possession” of the laptop after it went unclaimed.

A cybersecurity expert previously told the DCNF that Hunter Biden’s alleged emails could be “absolutely verified beyond a shadow of a doubt” if the metadata for the files were made available for review. 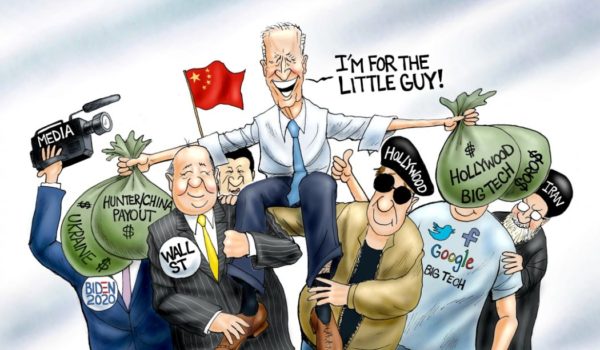