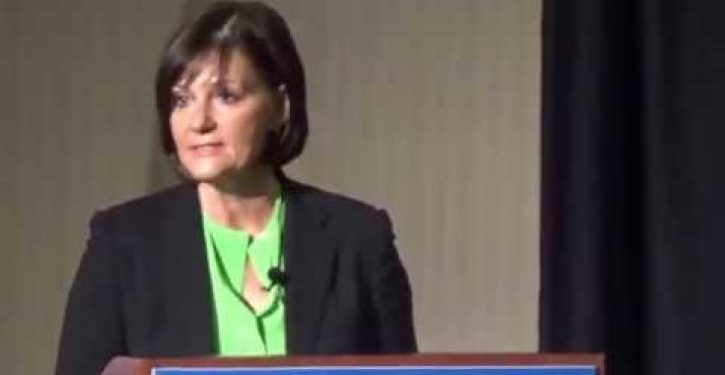 “LuAnn Bennett really needs a copy of How to Stop Lying: The Ultimate Cure Guide for Pathological Liars and Compulsive Liars,” they wrote.

Bennett, who is running for Representative in Virginia’s 10th congressional district against Republican Barbara Comstock, apparently didn’t heed their advice.

She tried to pull a fast one on a crowd of voters when she claimed Obamacare had actually made health care more affordable. The people, rather than nodding in a agreement, laughed in her face.

DC liberal LuAnn Bennett is going to want this one back. Speaking today at the National Conference Center debate, Bennett was asked about Obamacare. Many Democrats have struggled with this important topic recently, especially in the aftermath of Bill Clinton’s comments calling Obamacare “the craziest thing in the world.”

Bennett only made things worse for herself though. Instead of distancing herself from the flawed law, Bennett actually said that Obamacare has made health care “more affordable” for Americans:

BENNETT: “For the last fifty years, both parties have agreed that we have a health care crisis. By 2005, we had 47 million uninsured Americans and health care costs had grown to 16 percent of our GDP. The Affordable Care Act has made health care more affordable and it’s created access.” CROWD LAUGHS

Watch the comedy act below ….

The reality that the crowd understands and Ms. Bennett apparently does not, is that, in the words of former president Bill Clinton, Obamacare really is the “craziest thing in the world.”

Jason Miller, a spokesman for Donald Trump, explained “premiums continuing to skyrocket, state insurance markets collapsing and businesses struggling to comply with its job-killing mandates, even Democrats like Bill Clinton are coming to realize just what bad public policy Obamacare really is.”

Money magazine recently reported on the rising costs of health care under Obama.

The report adds that customers with prescriptions “know that costs have surged far above average in many cases.”

All in all, the rising health care costs under Obamacare and those Democrats that peddle it is no laughing matter.