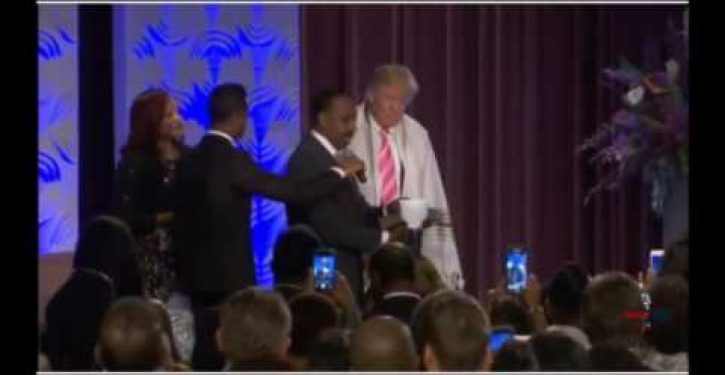 What wasn’t clear at the time was that the MSM video of the event was cut off in the middle of Bishop Wayne T. Jackson’s blessing to Trump, after Trump addressed the congregation.

Jim Hoft (Gateway Pundit) included a tweet from NBC’s Brad Jaffy, which had a 15-minute video of Trump’s speech.

Video—Trump speaks at black church in Detroit: "A lot of people don’t realize that Abraham Lincoln…was a Republican" https://t.co/gkbf70u8hB

You don’t see clearly in the tweeted video that the feed was cut.  If you watch to the end, you might notice that the bishop was cut off in mid-sentence.  Perhaps, you’d think, NBC editors cut the video off for broadcast.

But a video of the MSM livestream of the event shows otherwise.  Here it is.  (You can watch the whole thing, which runs just under 20 minutes, or follow along with the commentary below.  Or both, of course.)

Bishop Jackson is still speaking, but at about the 18:15 mark, in mid-comment, you see the video go blank.  Then, at 18:45, the “Please stand by” trailer comes on.  The recorded livestream is unedited, showing only what was captured from the livestream.

One version of what happened has been offered by “sundance” at Conservative Treehouse, who provides a video excerpt of the cut-off point posted at YouTube by user Full Metal Druid.

Full Metal Druid captions a couple of barely-audible protests from the camera man, being told by someone else to shut down recording in the middle of Bishop Jackson’s blessing, in which Jackson cites a verse in the gospel of Mark.

If you crank your volume all the way up, you can hear the protests.  Here is sundance’s summary:

It appears the camera operator was initially reluctant to cut the feed saying:

Moments later you can hear the intensity of the voice off camera increasing: “Shut it down” followed by the a voice asking “shut this down?” and the response “yeah”… “blackout“.  Seconds later in the middle of Bishop Jackson’s remarks the feed is cut…

I myself have been unable to discern the word “blackout,” which is captioned in the middle of loud applause and cheers from the congregation.  But I can hear the other captioned phrases.

This exchange is the one that has gone viral.  The video has been attributed, in the viral treatment, to a Reuters camera man.  But Reuters says it wasn’t their guy, and that in fact a CBS camera man was getting video of the event for a media pool.

Reuters’ version of the event questions the captioned phrases – says they can’t be verified – and states that the media were being hustled out to a motorcade by Trump campaign staffers.

Sopan Deb, a CBS journalist who was the pool producer for the event at the Detroit church, said the decision to cut off the video feed was made because Trump campaign staffers were hurrying reporters into a waiting motorcade.

“I was the pool producer,” Deb said in a tweet. “We were forced to pack up our cameras and leave during this.”

I’m a bit curious as to how the Trump campaign can enforce something like that, in a church venue when it has no authority to kick anyone out or make anyone stop filming.  The host here was Great Faith Ministries, not the Trump campaign.

Reuters offers this as background:

But this, in turn, makes me wonder why the media would apparently give no forethought to that known practice of the Trump campaign.  Why wouldn’t they assign enough reporters or camera men to cover the entire church event and the motorcade on the move?

It actually makes more sense to conclude that there was journalistic bias causing the cut-off of the video feed.  Arranging to have one guy to finish filming at the church, and another guy to move out with the motorcade, doesn’t seem like a stretch.  (I’m also betting Trump isn’t the only candidate who prefers not to be held up waiting for the media to join his motorcade.  I doubt that having enough camera men assigned to keep up with him is more than the media have to do for other candidates.)

For anyone who’s ever had to manage events with a lot of moving parts, the comments from CBS’s Sopan Deb frankly sound more like an excuse than a reason.

But probably the most interesting thing is how the age of alternative media just keeps throwing the MSM’s patterns of coverage into question.  It’s not a bad thing that their audience has to think for itself, and today has the tools to do it.