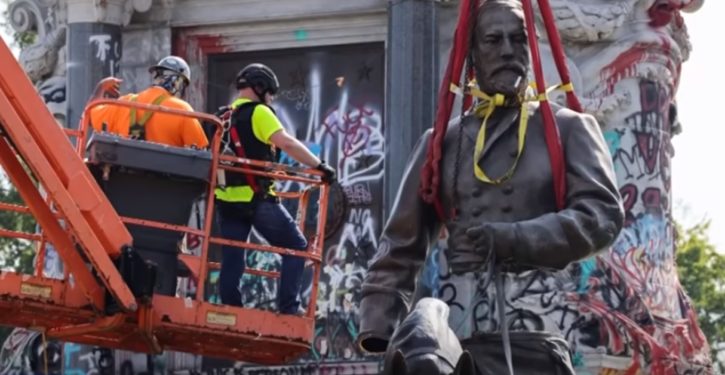 On Wednesday, former president Trump sent Twitter into a predictable frenzy when his online followers posted comments he made in a media release, about the removal of the Robert E. Lee statue in Richmond, Virginia, on the social media platform.

Twitter cut off Trump’s access early in 2021, but his emailed comments on various subjects are routinely posted by followers.

Trump’s update on the Lee statue demonstrated, as his comments often do, why his communications continue to resonate with his large base of supporters.  The bottom line is that he actually said something about the topic, as opposed to merely repeating a formulaic incantation.

Incantation was Virginia Governor Ralph Northam’s choice.  Northam enunciated unparsable nonsense: “This was a long time coming, part of the healing process so Virginia can move forward and be a welcoming state with inclusiveness and diversity.”

That ritualistic check in the block has no rational meaning.  It’s a form of fear-grinning or appeasement, gratifying to the straining ear of exclusionary group animosity (for which rooting out Robert E. Lee statues is a “Kill the pig! Kill the pig!” imperative) – but as a meaningful proposition, full only of sound and fury, signifying nothing.

Trump, on the other hand, decried the statue’s removal on the basis of Lee’s “greatness” as a general and a national figure, who “should be remembered as perhaps the greatest unifying force after the war was over, ardent in his resolve to bring the North and South together through many means of reconciliation and imploring his soldiers to do their duty in becoming good citizens of this Country.”

Said Trump:  “Robert E. Lee is considered by many Generals to be the greatest strategist of them all.”  A dubious contention, as is much of what Trump expressed in his media release.  He continued further on:  “If only we had Robert E. Lee to command our troops in Afghanistan, that disaster would have ended in a complete and total victory many years ago.”

Trump’s critics for the most part confined themselves to speaking only in their areas of expertise; i.e., their personal opinions of Trump’s stupidity.  Whatever.  A bucket of warm spit from Spiro Agnew would auction off for more than the Trump critics’ opinions.

We could make the effort, though, to respond to Trump’s points on their merits.  Most of the jackal chorus of critics obviously knew itself incompetent to do that, and steered clear of it.

On Lee being “the greatest strategist of them all,” for example, whom President Lincoln “wanted to command the North, in which case the war would have been over in one day” – probably not quite so much.  (Lincoln did solicit Lee for command of the Union Army.)

Lee was a justly admired proficient of operational maneuver, who arguably kept the South’s hopes viable past their natural expiration date given the North’s significant advantages in funding, logistics, and strategic maneuver (including access to seaborne and rail transport).

And, of course, it’s a Big Question how well Lee, a general of his time in terms of expertise and practice, might have adapted to the very different considerations and conditions of the long-running conflict in Afghanistan.

But ultimately it misses the point to focus on these dimensions of the dialogue.  Trump rings authentic with his audience – even the people who despise him – because he says straightforward things that have meaning and can be engaged on their merits.

There’s no engaging a phrase like “Virginia can move forward and be a welcoming state with inclusiveness and diversity.”  It’s a jumble of words that sounds soothing to some ears and vacuous to others.  In neither case does it have empirical, replicable meaning.  Is there a serious proposition that Virginia is neither “diverse” nor “inclusive” if there’s a statue of Robert E. Lee in it?  How does that work, exactly?  What does it even mean?  What is the observable difference between one theoretical condition and the converse?

What Trump has done all along is reframe dialogue to engage with reality, as opposed to genuflecting to an incoherent propaganda narrative (one that’s used to manipulate people, to boot).  Trump’s statements are arguments to persuade, not formula-soundbites meant to condemn and silence.

He’s done it again with his comments on the removal and dismantling of the Robert E. Lee statue.  His comments may be debatable — but that’s the point.  They can be debated, without having to be rephrased for intelligibility or some application, any, to reality.  Of course millions of supporters find this to be a huge relief: something to be applauded, something to want more of.

Coda:  It would not do to let the day go without highlighting an excellent piece on the cultural enormity of pulling the statue down.  This one is by Dave Reaboi, and is full of quotable passages:  “Healthy civilizations can only exist with a sense of honor and a reverence for their past, their history and their ancestors.”

I want to pull another quote, because of the two key propositions in it:

Millions of Americans trace their lineage to men who fought in the Civil War for the Confederacy. Contrary to modern historical revisionism—which is nothing more than a cudgel with which to beat contemporary political rivals—those who enlisted to fight in the South had many reasons to do so.

Reaboi is right.  Historical revisionism in our particular time is and has been mostly about contemporary politics.  Very rarely is it ever really about making our accounts of history more accurate.  Honest research can often make that claim; self-consciously thematic revisionism, per se, frequently cannot.

He’s also right that millions of Americans trace their lineage to Confederate soldiers and their families.  Millions also trace their lineage through both the Union and the Confederate armies.  I’m one of those millions.  Almost all of my ancestors arrived in North America before the Civil War, some as early as the time of Charles I (of Britain) and Cromwell.  A prominent pattern in their immigration to the colonies was that they were part of surges in the wake of civil wars (often but not always religious ones) and “wars of unification” in Europe.

Dave’s meditation on the need to reconcile warring neighbors when the issue has been settled by force of arms has direct relevance to the history of the United States.  Lee and Grant, in their project to reconcile Americans, were 150 years closer to that history, and in some cases still in the middle of it (e.g., the wars of German unification in the second half of the 19th century.  Those wars sent the last of my Europe-based ancestors across the ocean).

As our Founders knew from recent history that using the state to administer religion is a recipe for disaster, so Lee and Grant knew, from the same source, that failing to practice magnanimity in victory is fatal to a nation rent by civil war.  Almost every square inch of Europe attests to that; the mitigating factor is how far the evidence has receded with time.

Grant and Lee had good reason to seek restoration and reconciliation for the rebels.  They did not do it out of some anachronistically defined “racist” motive, but from an informed understanding of the danger in nursing a cottage industry of grievances, in the manner of the endless historical resentments of the Balkans.  A characteristic wonder of America, in this regard, is that “Reconstruction” ended, peacefully and without a resurgence of rebellion, after 12 years.  That is less apt to be said of similar arrangements anywhere in the Eastern hemisphere.

For a healthy perspective on national history, the simple truth, rather than dramatic moments of politically framed expiation, is the essential touchstone.  We should not paper over the events of 1921 in Tulsa, Oklahoma, for example; but we should recognize that they have not in fact remained papered over – have not been for 50 years – and the necessary healing from those horrible events has largely already happened, largely because of the powerful human spirit and life-affirming qualities in America’s black citizens, without whom America would not be who she is.  Reintroducing social strife where reconciliation has taken hold isn’t a noble endeavor.  It’s troubling our own house, and inevitably inherits the wind. 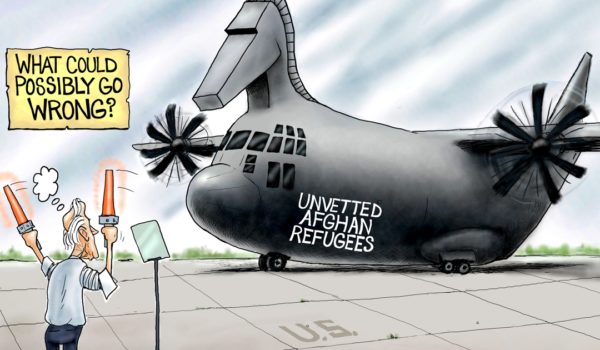