University of Missouri protesters and Black Lives Matter activists are angry that the press is covering the terrorist attacks that killed at least 129 people in Paris, rather than the micro-aggressions and lack of respect that black students allegedly experienced at the University of Missouri. “F*ck Paris,” wrote one.

The Missouri protesters recently threatened and assaulted an Asian-American ESPN journalist attempting to cover their protest, which they claimed was a violation of a “safe space” for “marginalized students” (they were caught on videotape taunting and baiting him, and falsely accusing him of assaulting and disrespecting them even as they assaulted him). Despite their spite, they were manifestly safer on campus than people were in Paris, where many died (including at least two Americans) and hundreds more were severely injured.

Claims that black students are “marginalized” at the University of Missouri are ironic in light of black activists’ dominance of campus political discourse there. The president of Missouri’s student government, Payton Head, is a gay African-American. Its vice president is another minority student who said that “First Amendment” rights create a “hostile and unsafe learning environment” for minority students.  In a display of raw political power, they managed to force the resignation of the university president and chancellor, over events like alleged off-campus racial slurs aimed at Head — something the University had no control over, even assuming Head’s claims were credible.  (Head’s credibility had been called into question by his recent baseless claims, which he later retracted after being refuted by university police, that the KKK was invading the campus, and that he was working with police to counter this non-existent invasion).

But activists continued peddling this nonsense after the Paris attacks, and expressed anger about press attention to the tragedy in Paris. “Y’all talking about #Pray for Paris. f*ck Paris. #PrayforMizzou.” “Now people are desensitizing #BlackLivesMatter and #Mizzou for what’s happening in Paris, have you no common decency?” “They making distractions so people can forget about the REAL issues we have in America.”

I wish I could say that this sort of spite is unusual, but it is not. It has been a feature of campus life for decades. A case in point is the enthusiastic reception that speakers from the anti-American, anti-Semitic, anti-white Nation of Islam receive on campus from self-styled “racial justice” and “anti-racism”activists. At both of my alma maters (Harvard Law School and the University of Virginia), a venomously bigoted Nation of Islam speaker, Abdul Alim Muhammad, was invited to campus by groups claiming to support racial justice (like the Black Student Alliance). Those groups gave him an enthusiastic reception, even though he denounced America, and said things that were antisemitic, not just racist against white people.

Such is the intimidating clout on campus of such groups that no student newspaper would even criticize the bigoted Nation of Islam speech at U.Va. on November 15, 1990, which lasted for four hours, featured an enthusiastic audience of 600 students (including virtually all of U.Va.’s black student leaders), and was filled with racial hatred and antisemitism. Nor would any individual student journalist criticize it (except for me), until a Muslim minority student from Bangladesh (Arshad Rahman) publicly condemned the speech on November 28 as a “heretical expression of race hatred.” That broke the politically-correct taboo among student journalists against criticizing the speech, and as result, they began to gingerly criticize the speech, although they focused not on its racism but on its antisemitism and one antigay remark made by the speaker.

While engaging in virulent race-baiting and bigoted speech of their own, campus radicals insist that opposing perspectives on racially-charged issues be silenced, using “racial harassment” complaints and threatened lawsuits to try to squelch dissent. Recently, the Ninth Circuit Court of Appeals cited the First Amendment in dismissing a racial harassment lawsuit against a white professor over his anti-immigration emails that allegedly created a “racially hostile environment” for Hispanics. In its ruling in Rodriguez v. Maricopa County Community College (2010), the court noted that the messages were not insults “directed at particular individuals” but rather were commentary aimed at “the college community” as a whole, and thus could not be banned under a “racial harassment” rationale even if they were racially charged and created a “hostile environment.” 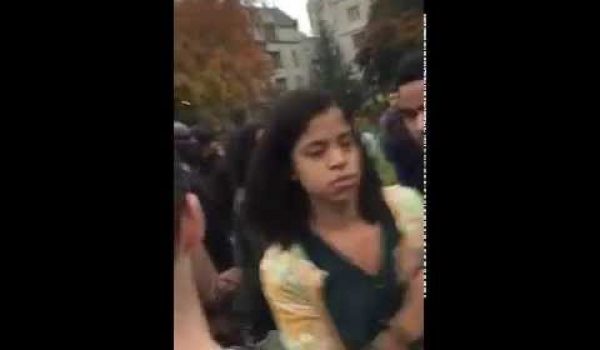