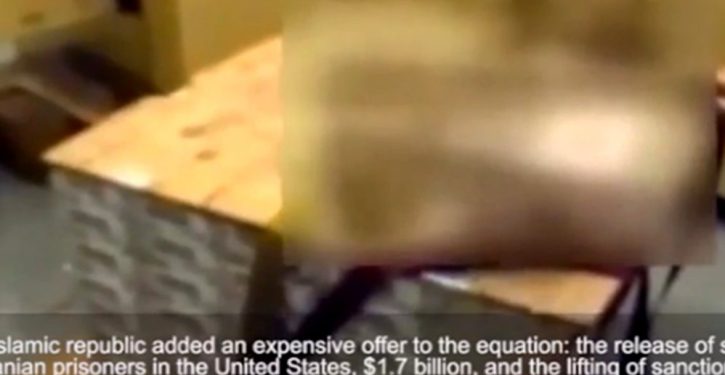 What a fascinating time it is to be alive.  Each day seems to bring some new, seemingly inadvertent “Trump truth” moment, in which Trump says or does something weird, and then three things come out:

1. The truth (which we would not otherwise have known).

2. The highly visible effort of the MSM to spin the whole thing deceptively as a way to attack Trump — even after the truth comes out.

3. The ineffectual caterwauling of the old-consensus right, which may say a few correct things about the actual, original topic, but which can only be heard saying Trump is an embarrassment to decent humanity, plus his supporters are morons.

What’s mind-boggling is how obvious it is that the mainstream media are going with their false narrative and refusing to acknowledge the truth, or even to let it be spoken.  I’ve asked this before, but I’ll ask it again:  has any nation ever, in human history, been given such a blindingly clear view of the way lies are being thrown at it?

It’s like everybody in America has a seat next to the mustachioed yo-yo creating the illusion of the Great and Powerful Oz, observing his machinations at our leisure with the curtain wide open.

I admit it.  I started hearing on Thursday about the video Trump said he’d seen of a cash-for-hostages swap in Iran, and I thought, Hmm.  It sounded far-fetched, but there seemed to be no reason to make that up.  Then I heard the rapid surge of blowback against him from the MSM and the Seemly Right, and my reflexive thought was this:  “There’s a cash-for-hostages video.  I don’t know how Trump saw it, but he saw something.”

And sure enough.  There was a cash-for-hostages video.  It was aired in Iran as part of a news documentary in February 2016, about a month after the cash-for-hostages swap, which took place on 17 January.  In the video, the Iranians put together footage of a plane arriving in Tehran and an image of stacks of currency on a pallet, explaining over the visuals that the cash delivery took place in the early morning of 17 January.

*UPDATE* (July 2018): The original Daily Mail video has been moved since this post was first published. Please see this CNN video for footage of the pallets of cash in Iran.

And just to be clear, the Iranians depicted this as a one-sided deal in which they got the upper hand.  The narrator of the video put it this way:

But this was not all the Iranians’ demands. Lifting sanctions against Sepah Bank was added to Iran’s list. All of this, in return for the release of only four American citizens: a win-lose deal that benefits the Islamic Republic of Iran and hurts the United States.

Now, I’ll be the first to say that the Iranians frequently make deceptively-edited videos.  So, as David Martosko cautions at the Daily Mail story, we can’t tell if what we’re seeing in the Iranian video came from the events in the cash-for-hostages swap of January 2016.  But that doesn’t actually matter, because we already know — Obama has admitted it — that cash was delivered to Iran at the same time the prisoner swap with Iran took place.  The reality of the events is not in question.

More to the point here, neither is the reality of the video.  Trump was lambasted mercilessly for talking about having seen a video with a plane arriving and pallets of cash.  And the very next day, we find out there is just exactly such a video — and in it, the Iranians call the cash drop a ransom for the hostages, and make triumphal proclamations against Obama and America.

Did Trump see that video?  It’s hard to say.  For what it’s worth, Daily Mail had this in its article:

One of DailyMail.com’s Persian translators, a native-speaker who lived in Iran until two years ago, said: ‘This is Iranian practice 101. Of course they filmed it, and of course they broadcast it.’

‘I wouldn’t be surprised if someone advising Trump had seen the footage. And I’d be shocked if the White House didn’t know about it the day after it aired.’

This is where “Trump truth” takes on its really unique character.  There’s always something to legitimately criticize about what Trump has said or done.  In this case, he said he saw a video — describing it in details that really freaking match the actual video now unearthed — but later walked back his statement about those particular details.  After his campaign staff said he didn’t see such a video, but only saw a video of the American prisoners arriving in Geneva, Trump came out in a tweet and agreed with his staff.

So the damage is done, and the MSM will just keep running with their theme that everyone is laughing at that colossal doodoo-brain Donald Trump.  The guardians of the old-consensus right will be at pains mainly to let us all know how embarrassed and distraught they are over this ungovernable creature.

Google search results will keep looking like this (which at least is cheap entertainment): 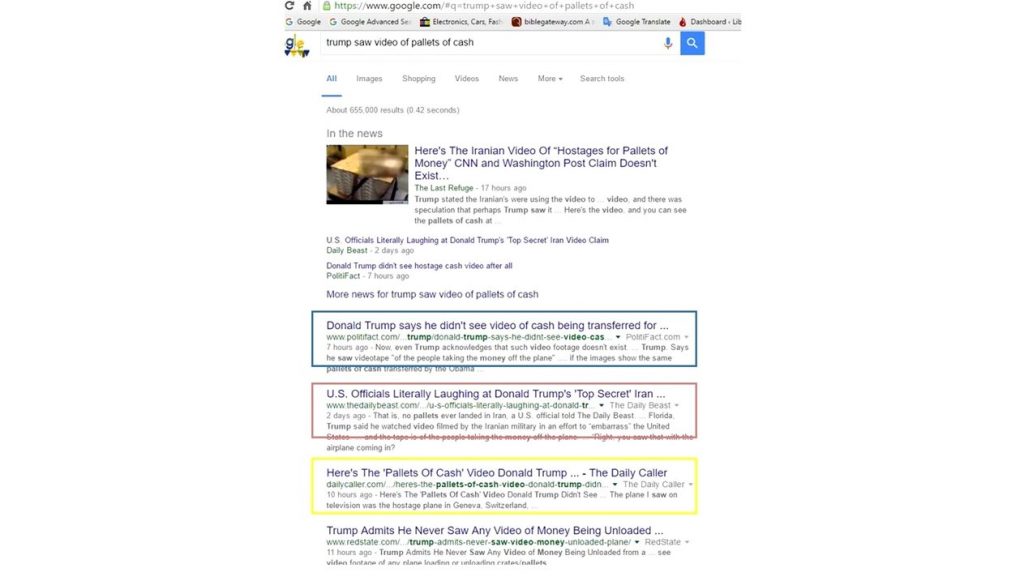 And it will take diligence and thoughtfulness on the part of the American people to sort out reality, truth, and irrelevant nonsense, and put everything in the correct column.  No one in our old-consensus apparatus is going to help us out with that.  Our old-consensus apparatus — framed by the essentially Marxist body of assumptions of the last century — has no answers or help to give us.

Are we ready to learn that lesson yet?  Write it in neon letters 12 feet high, if you need to.  For my money, it’s like this.  Khizr Khan has explained what he thinks Allah is doing to Donald Trump.  What I think Jehovah is doing through Donald Trump is illuminating for Americans the great moral reality of our current situation.  Which isn’t that Trump is our “answer.”  It’s that our “answer” doesn’t lie in the 2016 election, or even in American politics at all.  The sooner we get that, the sooner we’ll be eligible to be an America again that isn’t whipsawed within an inch of our lives by our own political process.