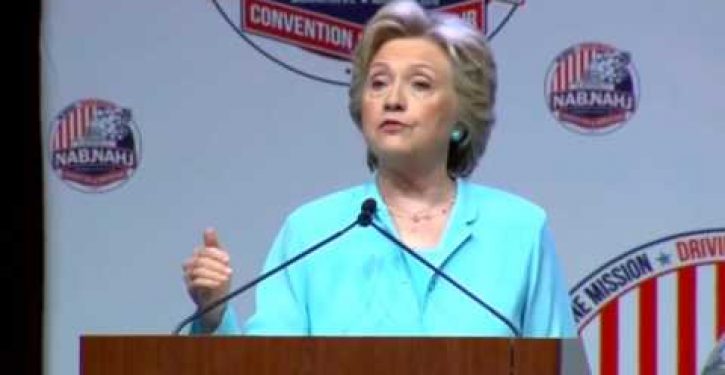 Dr. Freud, Dr. Freud! You’re wanted in Observation Room #3. Patient is confused and poses a risk to herself and 323 million others!

In a speech made several days after she unwittingly promised to raise taxes on the middle class, Democratic nominee Hillary Clinton suffered another Freudian slip … or accidentally told the truth again.

And of course I hope you will compare what I am proposing to what my husb—, my opponent is talking about.

What is significant about this slip is that her husband’s recipe for economic growth and job creation as president was the diametric opposite of what Barack Obama did and what his candidate wife is now proposing. As Jerry Shenk wrote in 2010:

[T]he balanced budgets of the [Bill] Clinton years didn’t occur until after a Republican Congress passed and the president reluctantly signed a 1997 tax bill that lowered the capital gains rate from 28% to 20%, added a child tax credit, and established higher limits on tax exclusion for IRAs and estates.

Something else Hillary overlooks as she tout her plan to bring Bubba out of retirement and put him “in charge of revitalizing the economy”:

The Clinton tax policies of the early ’90s were based on rate increases and luck — the luck provided by a normal growth cycle that began in 1992 as America emerged from a mild recession and a communications revolution.

We are currently living in far more perilous and uncertain times, exacerbated by the intense polarization in the nation after eight years of Obama.

Company has built profile on every American adult
Next Post
Panderer-in-chief Clinton tells minority audience, ‘Some of my best friends are black’