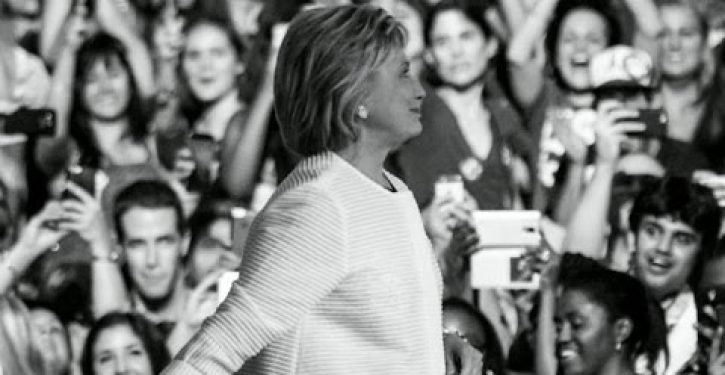 There are a bajillion and one professional film and documentary makers who would have given their eye teeth for a chance to do the bio video used to introduce Hillary Clinton (aka the first woman ever to receive a major party nomination for the presidency) on the last night of the Democratic National Convention. So who did Team Clinton select to make its biopic? Shonda Rhimes. And what is Shonda Rhimes’s claim to fame? She is the creator of the TV show “Scandal”!

Even The New York Times, which is far inside the bag for Clinton, couldn’t resist commenting on this irony:

Rhimes, who created the ABC drama about a Washington fixer caught up in a steamy web of sex and betrayal, … made the five-minute video … according to a person with direct knowledge of the convention planning who would only discuss the video on the condition of anonymity.

The video, narrated by Morgan Freeman, follows. As you probably guessed, Rhimes excludes the “steamy web of sex and betrayal” that Mrs. Clinton witnessed in her marriage and the numerous scandals she has been involved in directly, both as First Lady of Arkansas and more recently as secretary of state.

19 dead, 26 Injured in knife attack in Japan … where guns are outlawed
Next Post
Number of Americans renouncing their citizenship nears record highs