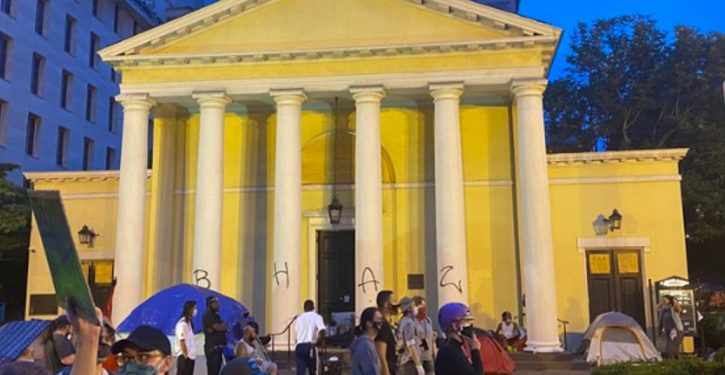 This is not your father’s “Weimar Republic” fight, although there are hallmark elements of it playing out.  The principal hallmark is the perception being assiduously fostered by the media that there are two sides to the violence and destruction in the streets.  (I.e., in the Weimar Republic, Soviet-backed internationalist communists and national socialists, the latter forming the core of the Nazi movement.)

The current profile of chaotic civil disorder, perpetrated and fomented by the radical leftists of Antifa and the trained, organized Black Lives Matter operatives, fits the Weimar mold – as it does the mold of all communist uprisings.  What’s lacking in America in 2020 is any semblance of an actual counterforce – e.g., “Nazis” – trying to fight it out with the communists in the streets.

No one doubts that there are neo-Nazis and KKK in the United States.  But those execrable elements are not in the streets toppling statues, breaking into small businesses and looting them before burning them out, shooting retired cops, setting homeless people on fire with firecrackers, taking over police stations, attacking random motorists, or engaging in gunfights at street corners and convenience stores.  They are simply not involved in the attacks that are making civil life impossible in many big cities.

Today @NPR called this woman a right wing extremist for fleeing a violent mob that was attacking her when she drove by. She was NOT charged with a crime, but her attackers WERE. #DefundNPR pic.twitter.com/D5nxM6k6rY

There’s no two-sided street fight going on.  The people creating civil disorder are not fighting Nazis or “fascist” police.  The agitators are fighting the ordinary, peaceable citizens of America.  They’re doing it because they want to destroy Americans’ lives, and destroy the country.

Note that this is not an apologetic for anyone on the “far-right” fringe.  There are some very disgusting people in that category.  (Two targeted murders in California, of a federal protective officer and a sheriff’s deputy, may be attributed to a fringe group calling itself “Boogaloos,” and law enforcement must certainly stay on top of intelligence about such groups.)

But no one is having to fight them in the streets.  Any narrative that such a fight is necessary is aged-out radical-left propaganda, inapplicable to the current situation.

It’s not likely to become applicable either.  There is no “Hitler’s brown-shirts” organization in 2020 America.  It doesn’t exist.  The Kristallnacht-style attacks around the country are coming from organized far-left radicals (and their less-trained recruits).

This emerging war on America is a moving target.  Three very quick updates for Monday night.

BLM founder says removing Trump before the election is a priority

Patrisse Cullors, one of the three founders of Black Lives Matter, spoke to CNN’s Jake Tapper on Friday 19 June, telling him that BLM has a key goal of removing President Trump from office.

President "Trump not only needs to not be in office in November but he should resign now," says co-founder of the Black Lives Matter Global Network Patrisse Cullors. "Trump needs to be out of office. He is not fit for office." pic.twitter.com/T6mLZ11cEv

Said Cullors: “Well, I’m, hands down: Trump not only needs to not be in office in November, but he should resign now.  Trump needs to be out of office.  He is not fit for office.  And so what we are going to push for is a move to get Trump out.”

She did mention Biden: “While we’re also going to continue to push and pressure Vice President Joe Biden around his policies and relationship to policing and criminalization, that’s going to be important.  But,” she stressed, “our goal is to get Trump out.”

Cullors also spoke back in 2015 to the Marxist ideology underlying BLM, and a clip from that interview has been making the rounds on social media in the last few days.

“We actually do have an ideological frame,” Cullors tells the interviewer, Jared Ball.  “Myself and Alicia, in particular, are trained organizers.

“We are trained Marxists.  We are super versed on, sort of, ideological theories.”

The full interview is here.

If you’re reluctant to call the central organizers of BLM Marxist ideologues, keep in mind: they’re not reluctant at all.

On Monday evening, a BLM group began trying to set up an “autonomous zone” at Lafayette Square outside the White House in Washington, D.C.  The zone was named Black House Autonomous Zone, BHAZ, which was duly spray painted on the columns of the Greek-revival façade of St. John’s Episcopal Church.

While this attempt was in progress, with the usual setting up of barriers, rioting vandals got into Lafayette Park and got some chains hooked up to the statue of Andrew Jackson.  They were trying to topple it when the Park Police showed up in force and herded them off with riot control gear, reportedly including pepper spray.

Police have arrived and are taking back Lafayette Square outside the White House. Chemical irritants are being used on protesters. It’s incredibly tense. pic.twitter.com/JsLc2ts6L4

Police have arrived at the White House where protesters were trying to tear down a statue and build an autonomous zone. Tensions are high: pic.twitter.com/TFnkOR8cs6

Two women are screaming at the cops outside the White House. pic.twitter.com/V9wTsoFDzf

From the comments on social media, it appears that onlookers’ sympathy with vandals who get pepper-sprayed has declined dramatically since the last time we went through this, in the first week of June.

The D.C. Metropolitan Police and the Park Police also got to work dismantling and breaking up the BHAZ attempt.  The last information, after midnight on Tuesday, is that the BHAZ effort has not succeeded.  There were still a lot of people milling around shrieking and harassing police and media as of a few hours ago.

Protestors and police clash outside of the "Black House Autonomous Zone (BHAZ)" established near the White House.pic.twitter.com/12rvQmkG0G

Across the continent, in Seattle, Mayor Jenny Durkan was facing the reality of a second shooting incident on Sunday night.  In the first on Saturday morning, one man was killed and another seriously injured (and now in critical condition in the hospital).  Police and EMTs were unable to get into the “Capitol Hill Occupied Protest” (CHOP) zone, formerly called CHAZ.

With the second shooting Sunday night, resulting in an injury to a third man, the mayor decided to have the zone dismantled starting Monday evening.  Reportedly, protesters were told to evacuate by 8:00 PM local (Pacific) time.  There has been little information since then to indicate what progress is being made.

Why are the CHOP organizers tweeting out pro-CCP propaganda? pic.twitter.com/pTKHs2nuxa

At this point there’s at least evidence of the BHAZ in D.C. being taken down.  No reliable word yet on the status in Seattle.  I’m not sure the police by themselves can handle it, if the “occupiers” resist.  Jay Inslee may need to send in the Washington National Guard.

This is a development I don’t like at all.  An unidentified man seen in a reporter’s video at Lafayette Square ranged himself with the Park Police and appeared to used a baton to ward off the reporter and others in a confrontation on Monday.

Here is full footage of encounter with unmarked individual who attacked me and a protester with his baton. Cops did NOT know who he was, or even if he was a government official. As I go through more of my footage if I find him again I will post. @VOAAfrica @VOANews https://t.co/Ee18tVf6M7 pic.twitter.com/YphzkhH8VY

There were no visible signs of the man’s identity or affiliation.  He had on jeans, a green jacket, and a security vest, and the reporter, VOA’s Jason Patinkin, said the Park Police either didn’t know who he was or declined to state who he was.

On Twitter, one user has said that he’s a deputy U.S. Marshal, one of those deputized in early June when Trump called up some military units and beefed up federal law enforcement presence in the Washington metro area.

He is a US Marshal …. Trump Deputized thousands of them recently and US Marshals don't need ID or anything else not even warrants ..they take orders from the AG and President only

That may be, but it’s hardly satisfactory to deduce who he is by the lack of identifying insignia.  The concern isn’t just that unidentified people may be manhandling reporters or innocent bystanders.  It’s also that anyone can basically show up dressed and behaving the same way, and potentially pass himself off as a deputy Marshal, at least for long enough to perpetrate some real mischief.  I wouldn’t put it past any trained radical group in America to try that.

It’s not as if this man was there for surveillance, blending in, keeping tabs on high-threat individuals, making special-skill arrests, and so forth.  He was taking his place – as a singleton – alongside the Park Police, engaging overtly in basic riot control, but not in any apparent coordination with the USPP.  It frankly looked weird.

What assurances does the public have that this won’t get out of hand?  I’d rather have the Army deployed in uniform around the White House, even if it takes a few weeks to settle things down, than start dribbling out anonymous individuals wielding batons in mixed crowds (i.e., peaceful protesters, reporters, and agitator-organizers, all of whom appear to be present).  That style of development is going in the wrong direction.