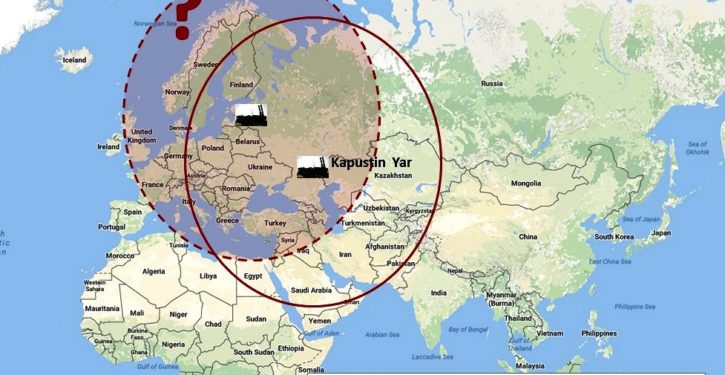 Has the treaty-violating SSC-8 been deployed to western Russia? We don't know. (Google map; author annotation)

With Republican National Convention delegates about to officially nominate Donald J. Trump as their presidential nominee, how does Trump cobble together the 270 electoral votes needed to win the White House?

Seeking an historic reference, I turned to the 2004 electoral map — the last time a Republican presidential candidate reached that milestone.

Marveling at that contiguous sea of red, what states did the Bush 2004 reelection campaign consider battlegrounds? For an answer I turned to Mark McKinnon who served as the Bush campaign’s chief media strategist. Surprisingly, McKinnon told me, “The whole ball game was Ohio and Florida.” I responded, “If this election were only that simple,” because twelve years later Trump starts with the grim 2012 Electoral College map shown below.

Unfortunately for Trump, based on Real Clear Politics (RCP) polling averages, two of those states — Virginia with 13 electoral votes and Colorado with 9 — are polling outside the margin of error and now tilting “Clinton blue.” Can Trump swing them back? In politics anything is possible. But demographics and entrenched negative attitudes toward the Republican brand make that improbable for reasons we will discuss later in this piece.

Besides the obvious electoral rich, traditional battleground states of Florida, Ohio, and Pennsylvania, Trump must also focus on formerly ruby-red North Carolina with its 15 electoral votes. Ever since Obama turned North Carolina blue in 2008, it has become a critical swing state for the GOP. Currently the RCP poll average has Clinton ahead by only two points. But her lead persists, a Clinton victory in North Carolina could be a national harbinger for a Trump defeat

The fact that North Carolina has joined the growing ranks of battleground states raises an important question: How did that solid Republican red map from 2004 morph into growing numbers of “purple” and blue-trending states?  Even once bright red Arizona has been cast by RCP as a new battleground.

First, since 2004, much of the nation has tilted markedly left of center on social issues while the Republican Party has moved further right.

Second, what was once a majority white Christian nation based on love of God, country, and traditional family values is swiftly evolving into one that is demographically multi-cultural and religiously non-affiliated. As proof, a new Pew Research Survey reveals that for the first time, non-religious voters comprise the nation’s largest bloc at 21% of registered voters. Catholic and white evangelical voters are a close second with 20% each.

Third, Americans are increasing relying on and demanding more government services and benefits. This development is anathema to the traditional Republican Party platform and its governing philosophy of smaller government and lower taxes.

With these three brief explanations in mind, the good news for Donald Trump is his candidacy resembles that of a third-party candidate temporarily hijacking the GOP.

Then, as if to compensate for the ill-mannered hijacking, Trump’s VP choice of Indiana governor Mike Pence is a desperate attempt to achieve party unity. It is also an admission that he needs Pence to help deliver the conservative base to the voting booth. But adding Pence to the ticket does little to help Trump gain traction with millions of independent voters in battleground states who Trump needs to lift him well above Romney’s 206 electoral vote total. That task will be left to Trump alone.

In order for Trump to mirror Bush’s 270 map from 2004, turn-out models estimate that he must come within two points of achieving what no GOP candidate has done since Reagan in 1984 — win 66% of the white vote. In 2016 that is a herculean challenge considering that in 1984 the white vote comprised 86% of the electorate!

By comparison, in 2012, whites as a percent of the electorate, had dropped to 72%. Romney won them by a decisive margin of 59 to 39% but Romney still lost to Obama in an Electoral College landslide.

Now in 2016 it has been estimated that the white vote will shrink to 71%, down a point from 2012. But the white vote could dip even lower if minority voters, especially Hispanics, surge at the polls.

For the record, the last elected GOP candidate, President George W. Bush, won the white vote by 58% to Kerry’s 41 — when whites comprised 77% of the 2004 electorate.

Thus, and if turn-out models are accurate, in order for Trump to win 270 electoral votes given that polls show he is repelling non-white voters at levels similar to Romney, Trump must win at least 64% of 71% of the entire electorate. That would be miraculous! It is also a total fantasy given that white voters under the age of 40 and white women in general tend to lean Democrat. But ANYTHING could happen this November with voter angst at record levels.

Finally, it is disheartening to recognize the role that skin color is playing in electing a president. One can expect this trend to continue as long as non-white voters continue block voting for the Democratic candidate.

Sean Trent, the respected research guru of Real Clear Politics offered some insight into racial voting and Trump’s chances of winning when he recently wrote:

If we do see Donald Trump push the white vote up into 63-64%, it suggests that as whites move towards minority status that they become more aware of their whiteness, and it plays into politics. It is a disheartening and dangerous trend, but it might be something we don’t have any control over.

With all the recent racial turmoil, police shootings and terror attacks becoming the new normal, disgruntled white voters — feeling that their country is slipping into chaos faster than they could ever have imagined — might rise up and support Trump at record breaking levels not seen since 1984. That is how Trump wins 270 electoral votes.

He has no other path to victory.

Cartoon of the Day: Trumping ISIS
Next Post
Melania, David Brooks, and why the old-consensus GOP lost to Trump