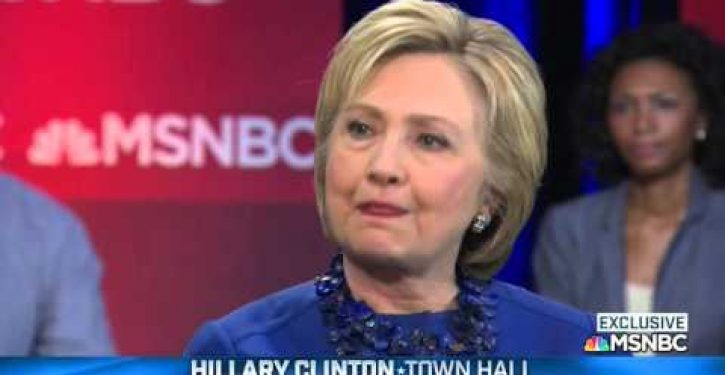 Remember Mitt Romney’s claim, much maligned by the press during the 2012 presidential campaign, that he havd accumulated “binders full of women” during his tenure as Massachusetts governor?

During an MSNBC town hall Monday evening, the Democratic front-runner was asked by host Rachel Maddow if she would match a pledge that Canadian Prime Minister Justin Trudeau made (and has kept!) to appoint women to half his cabinet positions.

Clinton’s answer, which you can view in its entirety in the video that follows, began with the statement, “I am going to have a cabinet that looks like America, and 50% of America is women.”

Clinton also asserted during the same campaign event that she intends to “go further left” than Barack Obama, who was content to settle for a measly four out of 15 female cabinet members.

An admission by a candidate for president that he intends to adhere to a quota system of any kind should be anathema to all voters, regardless of race, sex, or any other class characteristic. Yes, the notion dovetails approximately with the ideas of representation and equality, on which our nation and government were founded. But filling positions as important as cabinet posts with representatives of a pre-selected demographic implies that more meaningful qualities — think suitability to the job — were necessarily relegated to the background.

As an illustration of how contemptible such a declaration is, imagine the liberal reaction to a candidate for high office promising in this day and age that half his cabinet will be comprised of white males.

Much as the left might like to believe otherwise, “taking turns” is not a principle by which leaders or their high-up subordinates should be selected in the real world.

Oops: Student who sparked topless protest because she’s ’androgynous’ was in this play
Next Post
School named for Robert E. Lee could be renamed for WHO?