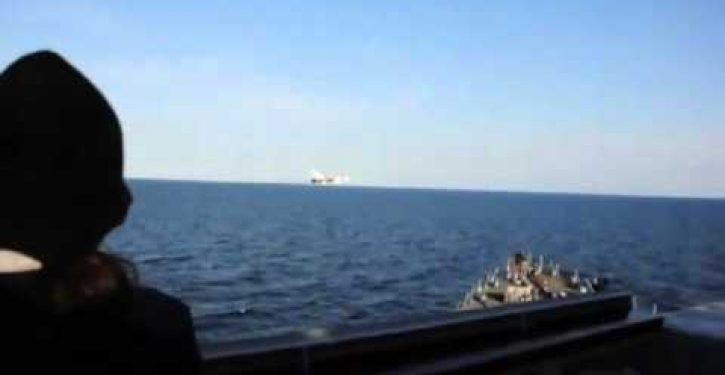 One aspect of it is essentially political.  What the Russians did constituted an egregious violation of the longstanding Incidents at Sea Agreement (INCSEA), which the U.S. and the Soviet Union signed in 1972.

And I mean egregious.  The Russians violated the exact language of INCSEA, as if that was their intention.  Here is the summary of the 11 April incident in the Baltic Sea from the U.S. Naval Institute blog, quoting a release from the U.S. European Command:

“One of the passes, which occurred while the allied helicopter was refueling on the deck of Donald Cook, was deemed unsafe by the ship’s commanding officer. As a safety precaution, flight operations were suspended until the SU-24s departed the area.”

Here is the language by which INCSEA proscribes such unsafe operations:

(Article IV) Commanders of aircraft of the Parties shall use the greatest caution and prudence in approaching aircraft and ships of the other Party operating on and over the high seas, in particular, ships engaged in launching or landing aircraft, and in the interest of mutual safety shall not permit: simulated attacks by the simulated use of weapons against aircraft and ships, or performance of various aerobatics over ships, or dropping various objects near them in such a manner as to be hazardous to ships or to constitute a hazard to navigation.

It’s not impossible that the Su-24 Fencers were also simulating attack runs on the Donald Cook.  News reporting has focused on the point that the wings of the aircraft were clean (visible in the video, and confirmed by U.S. Navy officials), meaning they weren’t carrying air-to-surface missiles or wing-mounted rockets or bombs.  But it’s not clear from what we can see in the videos or photos whether the jets were the standard attack variant – the Su-24M Fencer D – or the specific naval reconnaissance variant – the Su-24MR Fencer E.  The Baltic Fleet’s naval air arm operates both.  (The Fencers that made close passes over Donald Cook in the Black Sea in 2014 were reportedly E-variants, although that wasn’t initially made clear at the time of the incident.)

If the aircraft are Fencer Ds, they would have undermounted 23mm cannon.  The naval reconnaissance variant doesn’t have the cannon.

Given that the ones in the Baltic reportedly made about 20 close passes during the incident, they probably had the geometry on some of those passes to simulate gun attacks.  (The SPPU-6 gun pod for the GSh-6-23 cannon can traverse to -45° elevation, and +-45° azimuth.  The Fencers were well within cannon range of the ship on each close pass.)

That said, the sailors on-scene had the means to be certain which variants the Fencers were.  Since the Navy hasn’t suggested they were simulating attack runs, perhaps we can suppose they were most likely the naval reconnaissance E-variant.  (Actually, the closest inspection I can do suggests the pair may have consisted of one Fencer D and one Fencer E.  I note that the very low, high-speed passes by one of the aircraft – possibly a D – had zero value for reconnaissance.)

In any case, it’s easy enough to say that the ship’s air defense systems held both the Fencers and the Helix helicopters at risk the entire time, in their respective incidents, and could have blown them out of the sky at will.

But that’s the second danger being institutionalized by these repeated dangerous maneuvers from Russian military platforms.  The danger is not that we’ll shoot them down; the danger is that we won’t be able to tell when we should.

We’ll become conditioned to sitting passive while the Russians prance around us provocatively, within weapons range.  The more conditioned we are, the more the advantage and element of surprise they’ll have when they do go “hot.”

That danger was precisely the purpose of the INCSEA Agreement.  But it was less-egregious provocation that prompted us to negotiate INCSEA.  Contrary to what you may be hearing from blog commenters this week, we didn’t do this stuff all the time during the Cold War.  The incidents that did occur were less insanely dangerous, and it was those less dangerous encounters that we considered too much to tolerate.

Note further that the new “Code for Unplanned Encounters at Sea” Agreement, or CUES, contains the same language about not simulating attacks on ships at sea, or performing aerobatics over them.  CUES is one of Obama’s signature agreements, adopted by 21 nations, including Russia and China, at the Western Pacific Naval Symposium in 2014.  China violated CUES during an encounter with USS Ronald Reagan (CVN-76) in October 2015.  Russia has violated both CUES and INCSEA this month, if anything even more blatantly.

You won’t believe what this Ohio teen has been accused of live-streaming
Next Post
Japan hit by a 4th powerful quake; 2 dead, 45 injured