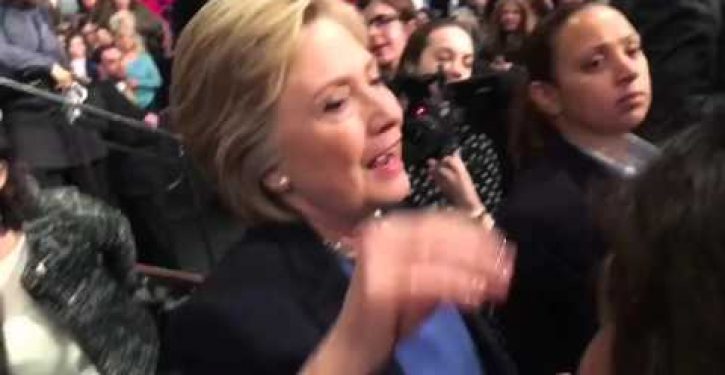 File this one under “Democratic Front-runner Devours Own Tail.”

Hillary Clinton lost her patience Thursday at a campaign rally when an audience member asked her a question that centered on her plan to combat global warming. Her position on climate change is one of the earliest she articulated as part of an effort to establish her liberal bona fides. The New York Times note July 2015:

With many Republican candidates saying they do not believe that climate change is a threat or requires government intervention, Mrs. Clinton assailed their logic, saying, “The reality of climate change is unforgiving no matter what the deniers say.”

She set a goal to produce 33 percent of the nation’s electricity from renewable sources by 2027, up from 7 percent today — a higher goal than the 20 percent that President Obama has called for by 2030.

Having pledged that commitment, you’d think Clinton would be happy to field a question on her dedication to saving the planet. Only this question posed by a Greenpeace activist had an unexpected wrinkle that caused Clinton to blow her top and shout, “I am so sick, I am so sick of the Sanders campaign lying about me. I’m sick of it.”

The Weekly Standard offers an explanation via Greenpeace:

At a Hillary Clinton rally at SUNY Purchase campus today, the presidential candidate lost her patience with a Greenpeace activist who thanked her for her commitment to climate change then asked her whether she’ll reject fossil fuel money moving forward. Pointing her finger at activist Eva Resnick-Day,

Clinton’s reaction is captured in this video clip of the exchange:

This is not the first time Hillary has been asked a tough question by the environmental group. In February, she responded to Greenpeace when they asked if she’d reject money from the fossil fuel industry by never answering the question.

According to the activist group, Clinton “takes more than $1 million in contributions from the fossil industry.”

Cross-posted in altered from from the Mental Recession