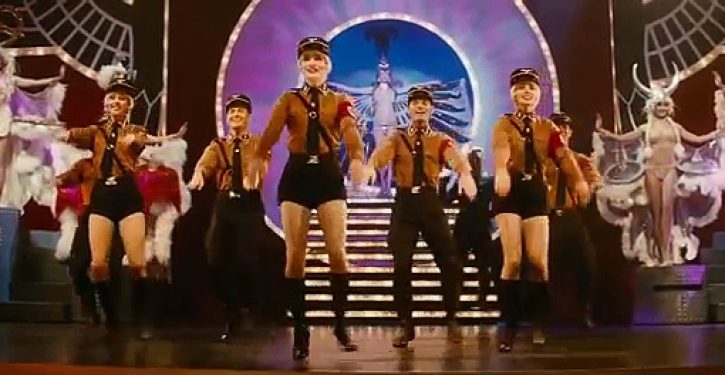 Look on the bright side: They didn’t force the show to be canceled altogether.

A New York high school has been forced to censor a musical performance after parents complained about certain scenes in the play and props used.

So which play was it? A dramatization of Steinbeck’s “Of Mice and Men,” which appears on the American Library Association’s list of “Most Challenged Books of 21st Century” because of its “violence and vulgarity.”

Nope. Tappan Zee High School in Orangeburg was putting on a series of performances of the popular musical “The Producers” over the weekend. The production revolves around a pair of Broadway producers who scheme to oversell shares in a musical and then produce a surefire flop, allowing them to abscond with the excess cash while writing off the musical as a total loss.

Their scheme fails, though, when the characters’ musical, “Springtime for Hitler,” a show celebrating the achievements of Germany’s infamous genocidal dictator, becomes an unexpected hit instead. The most famous musical number in the show features the opening and closing numbers of “Springtime for Hitler,” filled to the brim with swastikas, armbands, and goosestepping German troops.

Needless to say, “The Producers” isn’t pro-Nazi in the slightest, and instead draws humor from the absurdity of such an appalling play accidentally becoming a hit.

But with opening night just days away, some parents complained about the enormous Nazi flags adorned with the swastika that were hung up in the school gymnasium.

In the end, the parents were appeased and the flags were removed from the show. A few swastikas remained, though, in the form of armbands on certain characters and in a choreographed dance formation used during a song.

Joe Morley, whose son performed in the play, told The Journal News that the musical was also preceded by director Ed Clinton reading a lengthy disclaimer, explaining that “Springtime for Hitler” was a parody and that school administrators did not support the Nazis.

I was like: ‘Are you kidding me? Of course we understand. Don’t insult my intelligence. Do you really think you have to go through this?’

Based on the reaction of most parents, the answer to Morley’s question, intended as rhetorical, is a resounding yes.

There is no context in a public high school where a swastika is appropriate. The optic, the visual, to me was very disturbing. I considered it to be an obscenity like any obscenity.

Pritchard’s broad remarks raise further questions, such as whether “The Sound Of Music,” another classic musical that takes place in Nazi-occupied Austria, would be acceptable for a school performance.

North Korea sentences U. of Virginia student to 15 years of hard labor
Next Post
Fear strikes out: Tennessee bill would prohibit disciplining students for microaggressions