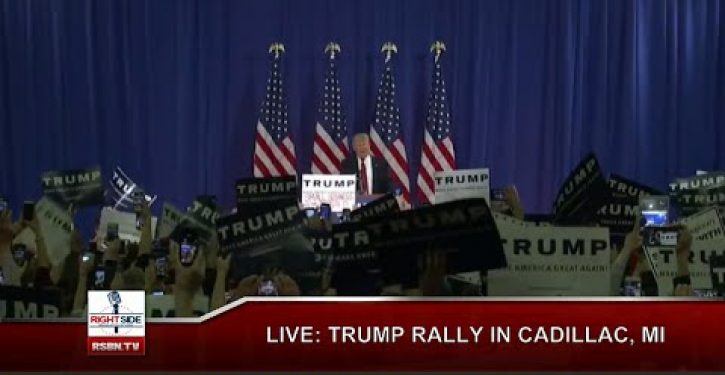 Jim Hoft at Gateway Pundit had a question in one of his posts this weekend:

Will Liberal Media EVER Report on VIOLENT LEFTIST THUGS at EVERY SINGLE TRUMP EVENT?

It’s a good question.  The media are quick to promote the theme that Trump and his security staff mistreat noble, innocent protesters at Trump events (along with photographers who decide to defy the Secret Service).  But they downplay the reality that the protesters get escorted out because they behave disruptively while Trump is speaking.

They also don’t report that Trump’s staff, the Secret Service, and local-venue security forces have good reason to expect misbehavior from protesters, because so many of them do the same things everywhere Trump goes.  And they further don’t report that these incessant disruptions are dealt with professionally and peacefully in every instance, by Trump staffers and other security personnel.

With thousands of people in attendance at his rallies there are dozens of fascist protesters who sneak in to each event.

They disrupt, scream profanities, throw punches, roll on the floor, rush the stage. They even turned out the lights at a massive rally in Atlanta.

If you rely solely on MSM coverage, you probably haven’t heard any of this.

If you do listen to the MSM, you hear selective, carefully “contextualized” coverage.  You hear the protesters’ side of the story, as with the ejection of protesters in Louisville on Tuesday (1 March).

And you hear a media narrative that advances an agenda but fails to reflect the truth, as this CNN story does covering BLM protesters who disrupted Trump’s event in New Orleans on Friday evening.  The CNN story ties the protesters, impressionistically and misleadingly, to the “intense scrutiny” of Trump after the David Duke/KKK kerfuffle.

Trump handled the media pursuit on that topic poorly, to be sure.  But it’s deceptive of CNN to pretend that the BLM protesters in New Orleans Friday night were there because of that issue.  They’ve been organizing to show up at Trump events for a long time now – since long before Jake Tapper taxed Trump last Sunday with Duke’s praise of him.

BLM was at the Trump rally in New Orleans for the same reason it has been showing up elsewhere: because it wanted to disrupt the rally, and get video of its protesters being removed.

And it appears that the media are trying to help BLM promote a theme of “scary” racists mixing it up in “melees” with BLM protesters at Trump events.  That effort has become particularly noticeable this week – as Jim Hoft discusses in a previous post on the topic from Friday night.  (More on that post below.)

After the Louisville rally mentioned above, for example, Raw Story focused on a “white nationalist” who mixed it up outside the venue with anti-Trump protesters, including some of the ones later escorted out by security.  The implication of the post is that whatever poor behavior the white nationalist group engaged in is connected with the removal of the BLM protesters from the rally.

In fact, of course, the white nationalists were there on their own time and had no connection to the Trump campaign.  The protesters were removed because they were shouting during Trump’s speech, trying to disrupt it.

Hoft’s Friday night post, which is about the Trump rally in New Orleans, links to numerous reports that the atmosphere was “scary,” “intense,” “physical,” etc., etc.  But his post also has the blessed benefit of extended video showing the BLM protesters being removed from the rally by security.

If you watch no other video in or related to my post, watch this one.  Yes, it’s 8 minutes long, but this is what you need to have in your brain when you think about BLM protesters being removed from Trump events.

Remember, this is the “scariest” Trump event yet, according to the on-scene observations Hoft has collected.

What I am principally struck by is how peaceable and orderly the Trump supporters are.  What we’re watching is so obviously not a melee that it would be journalistic malpractice to use that word about the incident.  The only people looking out of control and using foul language are the protesters.

Removing the protesters is not just something the Trump campaign has the right to do; it’s the right thing to do.  It’s what Trump owes his supporters when they come out to hear him speak.  They don’t come to see him get heckled by protesters.

For more of a flavor of the protester-removal, and how Trump himself reacts to it, see also the video of his appearance in Cadillac, Michigan, which was earlier on Friday (the 4th; below).

The protesters at that rally got the usual sympathetic coverage from local media.  But Trump appears good-humored and no more than sarcastic (if somewhat snarky, as usual), about a form of disruption that targets just about every campaign rally he holds.

The protesters interviewed in the Detroit News post put the worst spin on the event, and in the video, we don’t see the exact circumstances under which they’re escorted out.  (The action occurs between about the 31- and 36-minute marks.)  But Trump’s measured reaction, and the absence of further dark allegations from the MSM, suggest that their removal is as orderly as the removal we do have a good view of in New Orleans.

For one more salient data point, see how the Detroit City and Press reported the instructions the Trump campaign is giving to rally attendees on responding to the protesters.

Keep all this in mind in the coming weeks.  It looks like an effort is being ramped up to portray Trump’s rallies as violent, frightening events, with the implication that that’s because of Trump and the mass of his supporters.

I hold no brief for Trump, and I consider the racism of some of his supporters reprehensible, but that theme is outright false.  Protest groups like BLM specialize in making it look as if there’s mass violence erupting, when in fact they are the only ones fomenting scary physical disorder.

And the extended video from New Orleans shows that they didn’t manage to get that much started there anyway.  They’ll almost certainly try harder as the campaign season wears on.  But you don’t have to buy into the BS narrative that there’s a prairie fire being lit between rival thug groups at Trump rallies – or, and listen closely here, at the rallies of any GOP candidate, or at the Republican National Convention.

Taking it to the convention

Because the protests at those events are coming.  There was little national-media coverage of this on Thursday night, but there was a big crowd of usual-suspect protesters – BLM and other radical-left groups – outside the Fox News debate in Detroit.  Trump, the GOP front-runner, has been the most targeted candidate up to now, and presumably will be as long as he’s the front-runner.  But he’s just the flavor of the moment.

The protests will dog whichever GOP events have the highest profile as the campaign develops.  And we already know that Black Lives Matter plans to disrupt the Republican convention in Cleveland: co-founder Patrisse Cullors promised in July 2015 to make the attempt, and earlier that month, BLM had demonstrated its likely tactics, against a Democratic candidates’ forum at the NetRoots conference in Phoenix.  The Democrats – Martin O’Malley in particular – collapsed like an accordion, knuckling under and allowing BLM to take over the event.

I wrote the following at the time:

Republicans will have a choice.  They can react like Martin O’Malley.  Or they, and Cleveland, can be ready to – yes – expeditiously and unapologetically shut down the protests: if they erupt on the floor during convention business, or if they start to visit disruption and destruction on the citizens of Cleveland.

That’s what the security workers at Trump’s rallies have been doing: shutting the nonsense down.  There is no scary, Weimar-1920s-style street-fighting going on, with multiple gang-like culprits.  The radical-left protesters are attempting disruption, but the pushback they’re getting is from duly constituted security forces, in the context of orderly and lawful gatherings.

If the protesters start resisting physically, and expanding the scope of their disruption inside the events, they will be entirely and solely in the wrong – no matter what five guys from a white-nationalist group were doing an hour earlier outside the event venue.

But the MSM are going to paint a false picture, as if the huge number of people energized on the Republican side in this election cycle are complicit in a campaign season that’s turning “scary and violent.”  I hope rally attendees and convention goers will remember to keep those smart phones and video cameras in operation, because we’re going to need video records that capture the truth.

It may be tempting for some in the GOP to buy off on the “racist thug” narrative about Trump’s base.  But Republicans as a party do themselves no favors by fanning the flames of that narrative.  The more oxygen it gets, the harder it will bite the GOP – if Republicans don’t stand up to it, as the Trump campaign has been doing. 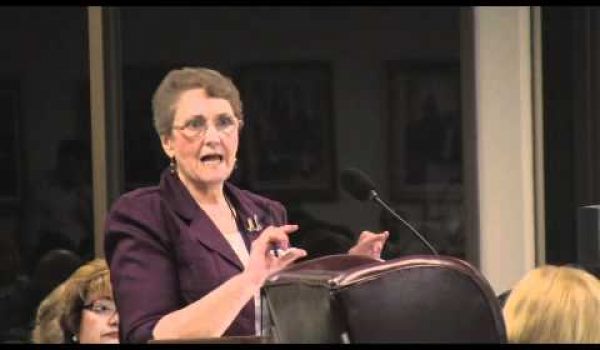