In this most peculiar of election years, it’s best not to grab hold of a weekend’s work as if it portends a major shift.  Let’s just stipulate that up front.  There’s no telling from day to day what’s going to happen in the 2016 primary campaign.

But [score]Ted Cruz[/score] picked up big wins Saturday in the Kansas and Maine caucuses, and the electoral day isn’t over yet.  In Kansas, Cruz (48%) outstripped Trump (23%) and Rubio (16.7%) handily, nailing down 17 delegates in another unprecedented caucus turnout.  As in other states, the caucus workers ran out of ballots at some sites due to the remarkable turnout.

These results are interesting because Cruz is so much stronger than most people probably expected.  He should have a strong showing in deep-red Kansas, but getting more than twice the number of votes Trump got is unexpected.  His margin over Trump and Kasich in Maine is more surprising.

Unless Rubio gets a big jolt from somewhere in the next few days (including the primary votes in four states on Tuesday), he will be looking terminally non-viable going into the Florida primary on the 15th.  That’s bound to affect the vote there.

Trump is ahead in the Kentucky caucuses, holding at 42% versus Cruz at 31% and Rubio at 13%, with 19% of the vote counted.  I haven’t seen anyone call that contest yet, but based on the most recent polls, I suspect Trump will be the winner, and probably won’t lose much to the others as the vote count rises.

We still await the results from today in the Louisiana primary, where the polls will close at 8 PM Central (9 PM Eastern). (Note: they closed before I finished this for posting.  I haven’t seen results yet.)  The Puerto Rico Republicans caucus on Sunday.  (The Democrats caucus in Kansas and Nebraska today and Maine tomorrow.)

Are we seeing Cruz-mentum building?  I’d like to think so.  He won the CPAC straw poll on Saturday with 40% of the vote among conference attendees.  Very honestly, if CPAC had convened two weeks ago, and if the straw poll had been held before the debate on Thursday night, I’m not sure Cruz would have won — or not sure, at least, that he would have beaten Rubio by 10 percentage points, and Trump by 25.

From where I sit, it was Cruz’s breakout performance in the Fox News debate on Thursday that kickstarted his surge this weekend.  He had a fine speech at CPAC, but I’m by no means the only pundit in the peanut gallery who thought Cruz actually came across as what John Kasich claimed to be on Thursday night: the adult on the stage.  Twitter was full of long-time Cruz critics commenting that he was having his best debate ever, and that he came off looking competent and in charge.

CSPAN aired the Rubio and Cruz appearances at CPAC back to back today (as reruns), and I was struck by the distinct difference in their approaches.  I think Rubio’s approach is actually hurting him, and I’m not sure if he’s taking his own advice on it, or someone else’s.  He has started hammering a theme of America being our greatest ever, and Millennials being America’s greatest generation ever — and his speeches come off as Pollyanna-ish and untethered.

It’s as if he doesn’t know that we’re in a crisis of excessive, unconstitutional government that really is going to decide whether freedom can be restored without unprecedented political action.  Rubio mentions almost no policy topics by name; he merely paints a weirdly rosy picture and seems to suggest — without saying anything specific — that we just need a few policy tweaks to stride forward in success and happiness.

I wonder if he, or a group of advisors, thinks that this is a Reaganesque posture.  If so, it’s interestingly deaf to both the real Reagan and the times we are in.  Reagan was never a Pollyanna.  He was blunt and often controversial about what was wrong policy-wise, and what needed to be changed.  If Reagan were campaigning in 2016, he’d be doing something closer to what Cruz is doing.  He’d acknowledge that we have reason to be seriously worried about the condition of the republic, and he’d be emphasizing a short list of policy specifics.

But Rubio is going off instead on a rah-rah tangent about our future that seems to have no basis in reality.  It would be one thing if he laid out a case for what needs to be fixed, in order for us to get to that future.  Give me about 3,000 words, and I could lay out such a case.  I’m optimistic about the possibilities for America too.  But 2016 absolutely must be about acknowledging how unrestrained government is destroying our country.  Fixing that problem is Job One for our political process.  We can’t keep carrying that dead weight on our backs.  It will destroy any future we might otherwise have; it — excessive government — is the problem.  But Rubio isn’t making that case.

Cruz is making it.  For my money, that’s why it’s taking voters longer to listen to him: because picking up on a logical case, however elegant and focused, is harder than picking up on emotional soundbite cues.  And a lot of Americans have become much more emotion-driven in the last 40-50 years, with shorter attention spans.  Cruz making the case for truly fixing unconstitutional government is also antithetical to what much of the GOP establishment really wants.  (If they really wanted it, we’d hear them talking about it a whole lot more.)  So the party isn’t going to embrace him enthusiastically, or amplify his voice.

But it may be that we’ve finally reached the point in the process where primary voters are starting to realize that Ted Cruz is the candidate who gets what the problem is, isn’t afraid to name it, actually intends to address it, and sees that process in terms of constitutional constraints.  Unlike Kasich and even Rubio, Cruz recognizes that we can’t just tweak a little bit on the margins.  We have to roll the scope of government back significantly.  Unlike Trump, Cruz clearly sees himself and the office of president as properly working only within the boundaries of the Constitution — boundaries he (Cruz) has a precise and unambiguous understanding of.

We’ll see how things go in the next few weeks.  Trump still has a significant lead in the GOP delegate count.  Although anything could happen in 2016, it looks to me like Rubio is all but gone: he’s unlikely to win Louisiana today, and his shot at gaining momentum out of 8 March — in Hawaii, Michigan, Mississippi, or Idaho — is slim.  If he doesn’t pick up a big win before the 15th, I really think a lot of Florida voters will be unwilling to throw their votes away by voting for him.  The same is probably true of voters in Ohio and John Kasich, but it’s clear to everyone but Kasich already that he’s not viable for the nomination.

On the Democrats’ side, Louisiana has just been called for Hillary Clinton (she’s up with 71% of the vote), and I heard her a few minutes ago speaking at a rally in Detroit.  She said something emphatic about how great it is there, with the street lights back on and the buses running again.  It didn’t go over: the cheering was all but non-existent.  I haven’t seen her audience displayed to us on the screen anywhere, but I suspect it isn’t very big.  That said, even a big audience probably wouldn’t get very enthusiastic over a rousing celebration of infrastructure conditions in Detroit.

The Kansas Democratic caucuses went for Bernie Sanders, according to a caucus official who spoke to news media.  No numbers have been reported out yet.

*UPDATE* Fox just reported, about 2 minutes after I posted this, that AP has called Louisiana for Trump.  There are barely 10,000 votes counted at this point (again, this is a primary election, not a caucus vote, so there will be a lot of ballots).  But Trump is up 45% over Cruz, at 23.7%, and Rubio at 21%.

*UPDATE 2*  Just a note at 10:15 Eastern/9:15 Central:  The media still aren’t calling Kentucky, with 44% of the caucus vote tallied.  Trump is ahead with 38%, but Cruz has put considerable distance between himself, with 32%, and Rubio at 14%.  Kasich is hanging in there for a minor scoop with 13.8%.  I tend to still think Trump will take this one, but the Louisville-area vote has yet to be reported, and the media are holding off from a call as of now.

Meanwhile, Cruz drew closer to Trump as the night wore on in Louisiana.  Trump is at 41.5%, Cruz at 38% with 96% of precincts reporting now.  Rubio was squeezed down to about 11% by the Cruz surge.

Not so fast with the ‘Hillary will beat Trump’ assurances
Next Post
BLM, MSM try to turn anti-Trump protests into a ‘thing’; warning signs for GOP in Cleveland 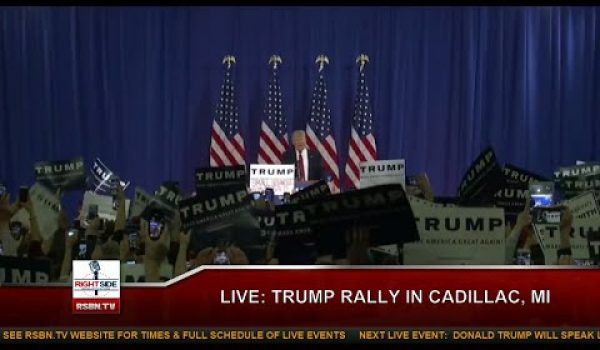