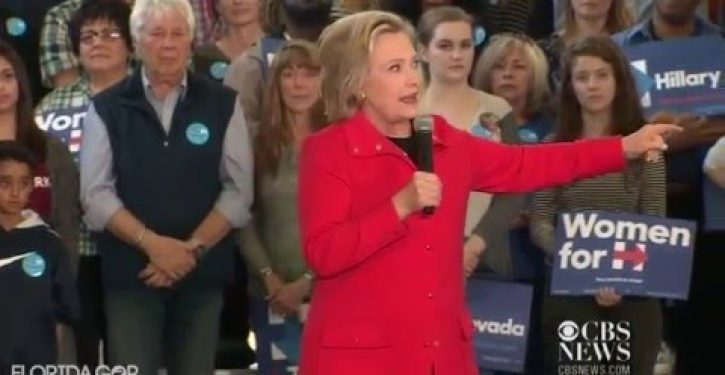 Hillary Clinton is willing to lie about anything, from the serious (how she handled classified information during her tenure as secretary of state) to the mundane (who she was named for by her parents).

She appears to be back at it again, telling another story about how her dad was a big, bad Republican and, because of that, she — a staunch Democrat — would get into loud arguments with him during her youth.

Clinton notes she was born in Chicago & her dad was a Repub. "We’d have arguments around the dinner table — every night when I went to HS"

While there is ample evidence to show that dear old dad was a Republican, as she claims, so — surprise! — was she. Although she would be loath to admit is now, her political CV includes canvassing for Richard Nixon and volunteering for Barry Goldwater.

Once in college, she became President of the Young Republicans and even attended the 1968 Republican Convention.

So either Hillary was telling yet another lie, or she had some serious dinner table arguments about who was more conservative.

This profile of an unambiguously flag-waving right-wing Hillary is borne out by Salon, which writes that “in 1960, Hugh Rodham supported Richard M. Nixon for president. His 13-year-old daughter went along enthusiastically.”

Further evidence from a 2015 USA Today article titled  “6 Things to know about Hillary Clinton,” which describes her as a “Goldwater Girl.”

During her time at Wellesley College, she “worked as a Washington, D.C., intern for Gerald Ford, who was then the Republican leader of the House, and worked for New York Gov. Nelson Rockefeller’s unsuccessful effort to get the GOP presidential nomination.”

Clearly there is no aspect of her life that Hillary Clinton won’t twist for her own political advantage.

The fact that she is now resorting to lame, pointless fibs about her childhood should make voters wonder if Hillary Clinton even has the capacity to tell the truth.

Naturally, if Clinton is confronted with any of these inconvenient truths, she will dismiss them as part of a vast right-wing conspiracy even though she was once part of it.