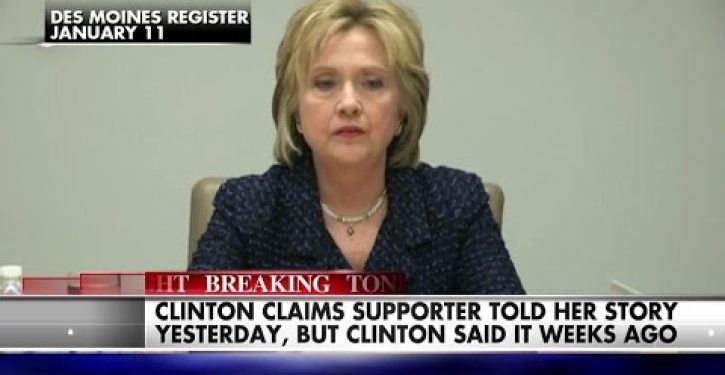 Hillary Clinton’s willingness to lie about even the most mundane, inconsequential things borders on a psychological disorder at this point.

This past weekend, the Democratic candidate shared an allegorical story she heard “the day before” from a “supporter” that summed up her experiences with the legality of her private server and the shifting goal posts imposed by right-wing conspiracy that has been attempting to bring her down:

The best explanation I hear of this I heard yesterday in Des Moines from a man I was talking to…. He said, ‘This is like you drive through the same intersection for years and the speed limit is 35 and then you move out of town and they change the speed limit to 25. And then they start sending you tickets.’

Unfortunately for Clinton, the story she allegedly heard “yesterday” was three weeks old. And the teller of the story wasn’t a supporter; it was her.

At a meeting with the Des Moines Register editorial board in mid-January, Clinton gave the same speed limit analogy.

If you’re going to be retroactively classifying materials that’s an impossible standard. You know it’d be like somebody in the Department of Transportation setting speed limits that had cameras where cars were going down a road, and pictures of license plates were being taken and let’s say the speed limit was 35. And then retroactively the police say that speed limit should’ve been 25, so let’s go back and look at anybody who drove down that road and exceeded 25, we need to follow up on that.

Fox News’s Ed Henry pointed out the similarities which left Megyn Kelly and the rest of the crew on set laughing at Mrs. Clinton:

Why couldn’t she just say the analogy is something she personally came up with or the people working on her campaign came up with? Why did she have to say it came “yesterday” from “a man” in Iowa?

Henry reminded viewers that this is yet another example of why voters find Clinton to be dishonest.

“Gives you an idea of one of the reasons why this whole question of trust, being honest has dogged her throughout the campaign,” he said.

U.S. airstrikes obliterate ISIS’s radio station ‘Voice Of The Caliphate’
Next Post
We regret to report that there’s a test-tube meatball now