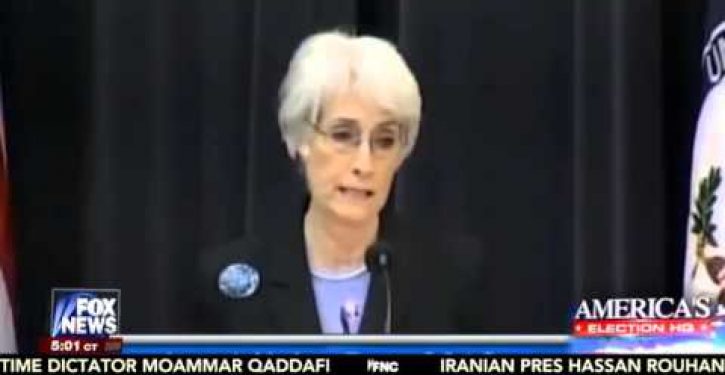 Fox News has obtained a video showing a former State Department higher-up bragging that Hillary Clinton had sent and received classified material on her Blackberry in 2011.

In the video, former Under Secretary of State for Political Affairs Wendy Sherman told a crowd that Clinton had transmitted things “that would never be on an unclassified system.”

According to Sherman, “delicate Mideast peace negotiations” were transferred between Clinton and Lady Ashton of the European Union and disseminated by their aides.

In the video, Sherman says:

“Now we have Blackberries, and it has changed the way diplomacy is done. Things appear on your Blackberries that would never be on an unclassified system, but you’re out traveling, you’re trying to negotiate something…. And so they sat there, as they were having the meeting, with their Blackberries, transferring language back and forth between them and between their aides to multitask in quite a new fashion, to have the meeting and at the same time be working on the quartet statement.”

Indeed, the emails Sherman references have appeared in State Department releases of Clinton’s emails and the information has been designated classified with the following codes:

1.4 (d)  Foreign relations or foreign activities of the United States, including confidential sources

“With an electorate valuing honesty and trustworthiness above all else, this new video spells big trouble for Secretary Clinton,” Bechdel claims.

A newly released poll indicates that Democrat voters value honesty as the most important trait in their preferred candidate. Among those who say honesty is most important, Clinton’s main challenger, Bernie Sanders, leads by 27 points.

The Clinton campaign refused to comment on the new video.

TX grand jury, convened to investigate Planned Parenthood, indicts undercover video-makers instead
Next Post
Hillary made millions off secret Wall Street speeches (from which the press was routinely banned)