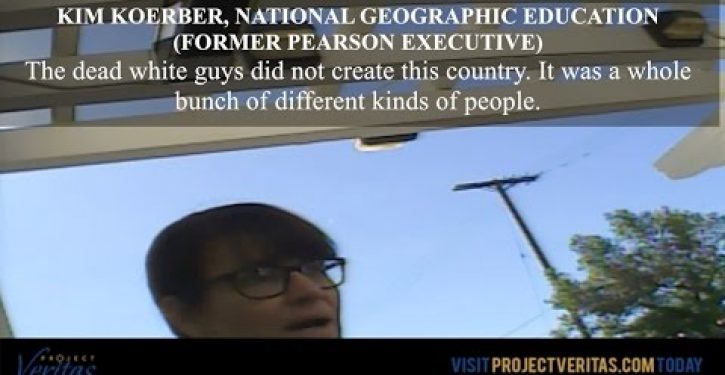 The latest undercover video to come out of Project Veritas, the third in their Common Core series, is a stunning insight into what is being taught – or not taught – in today’s educational curriculum.

In the video, a former executive with Pearson, the nation’s foremost school textbook publishing company, lambastes conservatives on the Texas State Education Board for daring to teach the Constitution in it’s proper context.

The executive, Kim Koerber, blasts the school board as “idiots,” but that’s far from the most offensive thing that comes out of her mouth. In response to the Texas school board’s desire to teach students about the Founding Fathers, she proclaims that “the dead white guys did not create this country.” When the videographer asks whether“Christianity is totally out of the Common Core?” Koerber replies, “Yes it is. Totally. It’s not a core concept at all.”

On the subject of the right to bear arms, she shays, “Damn the Second Amendment. I don’t think personal handguns need to be on anyone except the government, the police.”

Koerber goes on to explain that liberal teaching is superior to conservative teaching.

These Project Veritas videos help illuminate the well-known and long-standing reality of the U.S. education system that its guardians willfully ignored when telling us all about the magical fairy goodness land Common Core would bring American children and industry. It is that centrally planned education cannot fail but impose leftist ideology on American children, thereby helping morph a unique country founded on self-government into a sclerotic, quasi-socialist welfare state like all the others in the world, where inhabitants are slaves to swarms of regulators and their own passions rather than free citizens.

#BlackFilmsMatter: Affirmative action for the Oscars?
Next Post
How bad is Gitmo? So bad that one detainee, upon learning of his release, did this