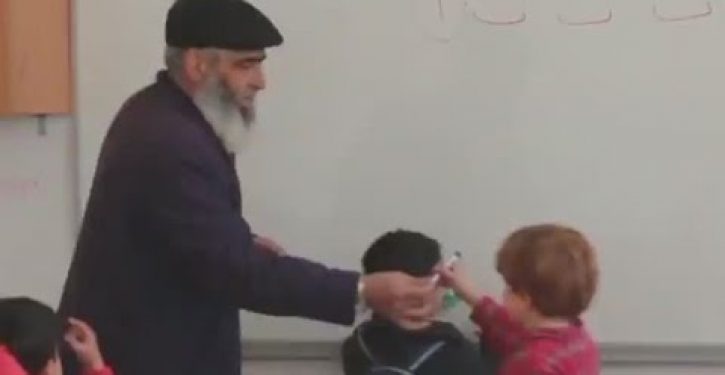 The legendary children’s TV show host Soupy Sales reportedly once told his young viewers to send him the “little green pieces of paper” they find in their parents’ wallets.

If you think that sounds pretty diabolical, CNN has a story that makes Sales’s antics look like — well — child’s play.

The network reports that ISIS, as part if its plan to train young children to become jihadists, is providing them with hit lists. It will come as no surprise that Americans are on that list. But it’s not just the “Great Satan” the kiddies are being instructed to kill. They are also being encouraged to murder their own parents.

A 12-year-old named Nasir said in an interview:

There were 60 of us. The scariest times for us all were when the airstrikes happened. They’d lead all of us underground into the tunnels to hide. They told us the Americans, the unbelievers, were trying to kill us but they, the fighters, they loved us. They would look after us better than our parents.

When they were training us they would tell us our parents were unbelievers and that our first job was to go back to kill them. [Emphasis added]

Nasir revealed that the youngest of the boys, nicknamed “cubs of the caliphate,” was 5. None of them, moreover, was excused from the grueling training administered by their cruel task master.

“We weren’t allowed to cry,” Nasir is quoted as saying, “but I would think about my mother, think about her worrying about me and I’d try and cry quietly.

Ultimately, Nasir escaped and was reunited with his mother, of whom he said upon seeing her again, “it was like coming back to life.”

Here is a video that details the sorts of ISIS training to which children in Iraq are exposed.

Can you answer the Final Jeopardy question all 3 contestants got wrong?
Next Post
DHS delivers shocking report on number of foreigners who overstayed their visas last year