Happily, after suffering through seven years of the most inept, snide, egotistical, and thin-skinned man ever to sully the Oval Office, we can finally turn our attention toward the light at the end of the tunnel.

Yesterday, for example, Barack Obama delivered his last State of the Union address, if in fact the dismal and self-congratulatory speech he gave can be called a SOTU.

At a time when radical Islamic terrorism is the number 1 concern of most Americans — a condition that Obama aggravated by underestimating the enemy in the first place and making cuts to our military in the second — he used last night’s bully pulpit to mock their fear with assurances that displeased the joint chiefs, who were present:

His SOTU fell, as happens so often, on a day when events abroad should have tempered his upbeat narrative. He chose instead to ignore the inconvenient truth that ten American sailors had been detained by Iran. He did mention Iran in his speech, but only to rattle off a fake accomplishment:

[W]e built a global coalition, with sanctions and principled diplomacy, to prevent a nuclear-armed Iran. As we speak, Iran has rolled back its nuclear program, shipped out its uranium stockpile, and the world has avoided another war.

Rolled back its program? Sadly he’s not joking. Apparently, he’s unaware that Iran has test-fired at least two long-range ballistic missiles since his agreement with him was signed. He appears similarly unfazed by or clueless abut the fact that the regime’s stockpile has by 20% over an 18-month period.

In the same breath practically, he gave himself a pat on the back on for the actions he took to contain the Ebola epidemic in Africa. He neglected to mention his irresponsibly headstrong refusal to limit flights from disease-stricken African nations to the U.S. out of fear he might be accused of marginalizing indigenous peoples. The fact that America was spared more than a handful of cases was in spite of, not because of, him.

It is too early to know how history will judge the presidency of Barack Obama. At least there is comfort for now in knowing the pain will soon end. Eventually, we will arrive at the last last: His boarding Marine One and heading away from the White House.

I for one can’t wait.

Snort of the Day: The (hand to God) ‘State of the Union Pre-Show’ hosted by an entertainer *UPDATE*
Next Post
College prof tells class most terrorists are ‘white conservative men’; wait till you hear his proof 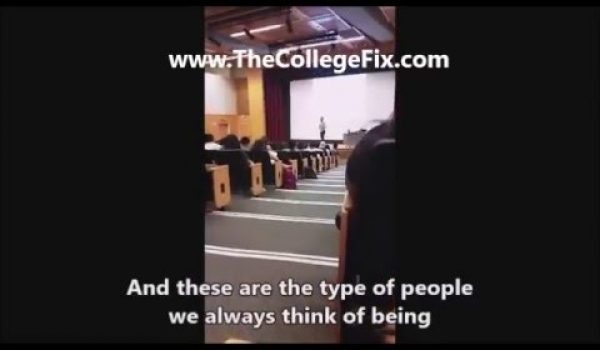