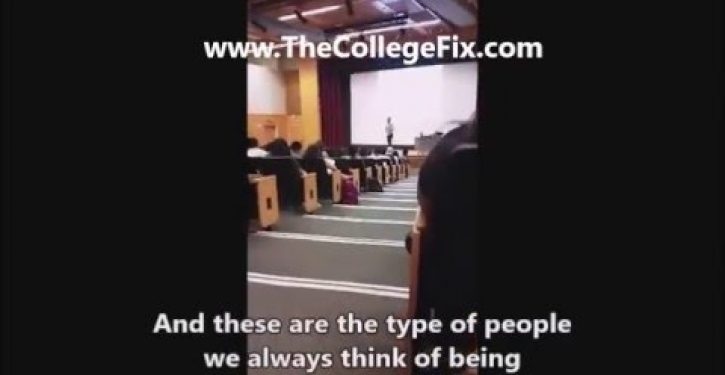 Video of a college professor at the University of California, Merced shows him telling students that 90% of terrorist attacks on Americans are committed by white men who are “religiously motivated and politically conservative.”

In other words, bitter clingers — not radical Islamists — were the culprits behind the shootings at Fort Hood and in San Bernardino, for example. The Boston Marathon bombers, the Times Square bomber, and the shooter in Chattanooga were also lily-white Bible thumpers, according to the prof, as were the dozens of perpetrators of acts of carnage in this list.

The teacher who shared these revelations is Ross Avilla, who teaches psychology.

To help him prove his point, Avilla cited the incident in which a white male Christian shot up the Texas statehouse with an AK-47. If you don’t recall that tragedy, don’t blame your failing memory. The event never happened.

According to The College Fix, Avilla went on to claim that “9/11 is basically the only act of foreign-born terrorism that has ever happened in the United States.” Avilla did clarify that not all “white men are evil,” but promptly added that “that is what we should be thinking about” when it comes to preventing future acts of terrorism. “Usually [the terrorists] are people who are religiously motivated and politically conservative.”

Here is a slide from Avilla’s presentation showing that most terrorists are white, male, religious, and conservative:

The video of the lecture follows:

What Obama did and didn’t do in his pathetic last SOTU
Next Post
Video: Obama’s hypocritical calls for civility during SOTU