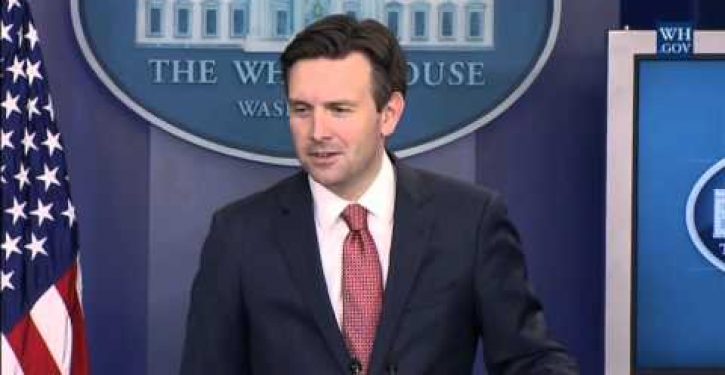 White House Press Secretary Josh Earnest was asked if new gun regulations being floated by the President would have prevented any of the mass shootings in America in recent years.

Surprisingly, he couldn’t think of any. (See video below.)

Recently, Fox News reporter Peter Doocy pointed out the absurdity in President Obama’s thinking that more gun control laws would prevent terrorism such as that in San Bernardino.

“The president thinks that if there are potentially two terrorists sitting around planning a mass murder, they may call it off because President Obama has put in place common sense gun laws?” he asked.

At Thursday’s press conference, he also made the chilling argument that second amendment rights should be denied to those “deemed by the government” to be a danger.

.@jearnest44 believes that people "deemed by the government" too dangerous to fly should be denied a constitutional right. Lovely.

He added that America is “awash” in guns, implying that this would not be the case and they’d simply disappear with more regulations.

"Our nation is awash in guns" -Josh Earnest, expanding on the "tragic irony" of people buying more of them after mass shootings.

Make no mistake, the President is poised to take executive actions to unlawfully infringe on your second amendment rights. Brace yourselves.

Middle class households have lost 30% of their wealth
Next Post
DHS admits: No idea how many Syrian refugees are in the U.S.