We’ll see if ISIS can survive the one-two punch here.

The POTUS-in-Chief is taking it to the “Islamic State” in Paris this week, delivering blow after blow with his climate-summit rhetoric like George Foreman KO-ing Ron Lyle at Caesar’s Palace.  Has a bloodthirsty, Islamofascist guerrilla-terrorist movement ever been driven so thoroughly onto the ropes?  You decide.

But Obama’s not stopping there.  His administration announced today that it’s appointing a new senior advisor to the president on ISIS.

.@PressSec announces that NSC's Rob Malley – who helped negotiate #irandeal – will now serve as Senior Advisor to the President on #ISIS.

The mainstream media picked it up a few hours ago.

Alert readers will remember Rob Malley as the foreign affairs activist – formerly a regional director with the International Crisis Group – who was abruptly dropped from the Obama campaign organization in 2008 when his contacts with the terrorist group Hamas were revealed by British media.  (American Thinker’s Ed Lasky has been on this from the beginning.)

Malley is a fan of talking with terrorists – he made the explicit case for it in 2006 – and seems to have come honestly by his affinity for Hamas.  His father, a founder of the Egyptian Communist Party who had the distinction of being expelled from exile in France for his communist activities in the 1970s, nursed a long association with Yassir Arafat, among other ideological radicals of the time.

Alex Safian put it this way in his CAMERA profile of Malley in 2008:

The world in which Robert Malley grew up was one in which Yasir Arafat, Fidel Castro, Leonid Brezhnev and Todor Zhivkov were heroes, any American leader – even Jimmy Carter! – was villainous, and Israeli leaders were veritable demons.

Malley was at Harvard Law School when Obama was, and shares the same worldview.  Malley’s ridiculous unsuitability for a major post with a mainline party candidate was obvious in 2008 – which is certainly an interesting point, since his background and views are so in sync with Obama’s.

But a few years later, after the 2012 election, Malley was quietly put on the National Security Council, as senior director for Iran, Iraq, Syria, and the Gulf States.  Early in 2015, Malley was moved up to the NSC position of Middle East Coordinator, a promotion that sparked serious concern from many observers.

In his new role at the NSC, Malley put his stamp on the negotiations with Iran in 2015.  (In fact, we are advised that he participated in the celebratory toast, with a bottle of fine Madeira donated from Portugal, enjoyed by lead negotiators John Kerry and Energy Secretary Ernest Moniz.  Take that, ISIS!)

So, basically, Malley has been closely embedded, at the apex of influence, in the great security policy catastrophes of the Obama administration involving Syria, Iraq, and Iran.  Just take a moment and think how that’s been going for us on his watch – including the feature of ISIS’s meteoric rise during this period.

Malley favors talking to terrorists, and has urged the world to do just that with the homicidal baby-killers of Hamas.  As a bonus, he made contacts with Hamas himself, something that you would still be under hostile surveillance for by U.S. agencies, if you had done it.

And now he’s going to be Obama’s top advisor on ISIS.  Yay!

A correspondent suggested to me earlier today that it would be a waste of time for Malley to persuade Obama to cooperate with Iran and Hamas against ISIS, because we’re already doing that.  (Putin would disagree, of course.  He’s got his narrative, others have theirs.)

But why think small?  Mark my words.  Robert Malley’s distinctive approach will be cooperating with ISIS.  Hey, terrorists have grievances, and what they really need is an invitation to sit down and talk.

It’s the left upper-cut, from out of nowhere.  ISIS will never see it coming.

(For those who want to read up, the Robert Malley page at Discover the Networks is here.)

Kill me; I’m a ‘white devil’
Next Post
Former DIA director: Probe of intel-cooking should start ‘right at the top’ 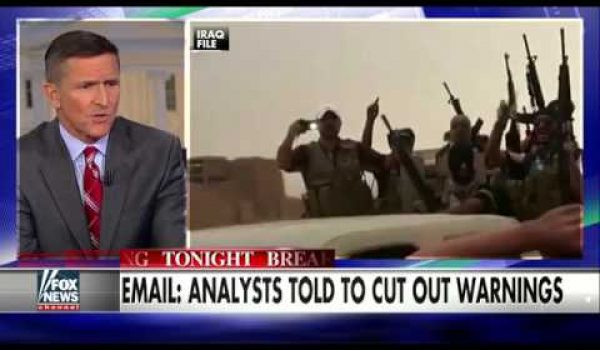