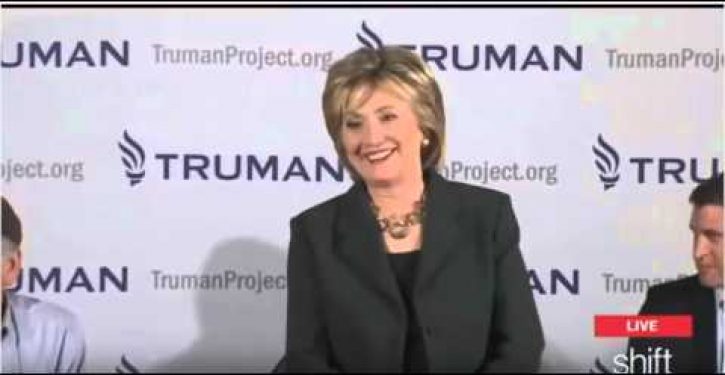 Apparently it’s only a war on women if Republicans make controversial comments.

At a campaign event in New Hampshire, a supporter of Hillary Clinton declared that every time he sees Carly Fiorina on TV he gets the urge to “strangle” her.

Clinton responded to the man by joking that “I wouldn’t mess with you.”

Ha ha! See, it’s funny to make jokes about violence against women, as long as the woman is a Republican.

Here is the video of the hilarious exchange:

Just a couple of months ago, Clinton admonished Donald Trump for not denouncing hateful rhetoric made by a Democrat plant in a crowd of supporters during a campaign rally. She condemned him for his inaction on Twitter.

Of the video, Ian Prior, communications director for American Crossroads said:

This exchange says all you need to know about Hillary Clinton

She loves to play the ‘war on women’ card when it helps her get votes.  But when she stands to lose a single voter by condemning his comment about ‘strangling’ a women, Hillary is more than happy to go right along with his tasteless and inappropriate joke.

Will the media hold Clinton accountable the way they did a Trump supporter’s anti-Muslim comments?

Cartoon of the Day: Get off my lawn
Next Post
Germany moves to deport refugees, drain other EU countries