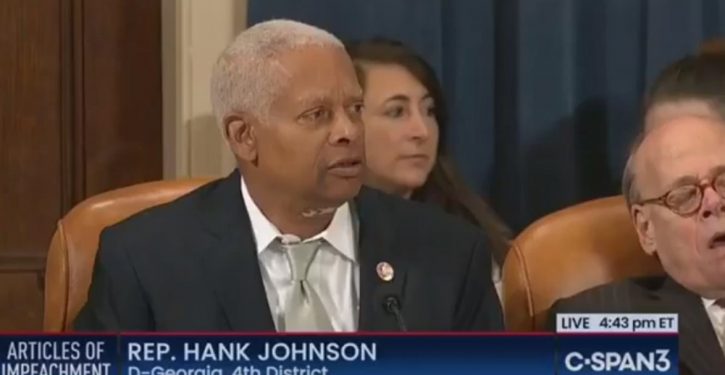 Johnson spoke with some anxiety about Trump’s meeting with Ukrainian President Volodymyr Zelensky in New York in September, pointing out the significant difference in height between Trump and Zelensky.

With a sidelong expression of quizzical skepticism, Johnson delivered his zinger: “And you saw President Zelensky shaking his head, as if his daughter was downstairs in the basement, duct-taped.”

Rep. Johnson has made headlines before for, er, dramatic license.  Ben Bowles reported earlier today for LU that Johnson called for impeaching Trump to avert the “national emergency” it would create if Trump remained in office to the end of his term.

But Johnson is probably most famous for worrying in 2010 that the island of Guam — the U.S. territory — could tip over and capsize if it became overpopulated.  Ben has the video on that, with Rep. Johnson expounding the hypothesis in his inimitable way.

As this image seems to clearly indicate, the chairs provided for the two presidents at the New York meeting were the same size.

We note, for completeness, that President Trump’s height is officially given as 6’3″.  President Zelensky’s is reported to be 5’7″.  This may account for the appearance, when they stand next to each other, that Trump is some eight inches taller than Zelensky.