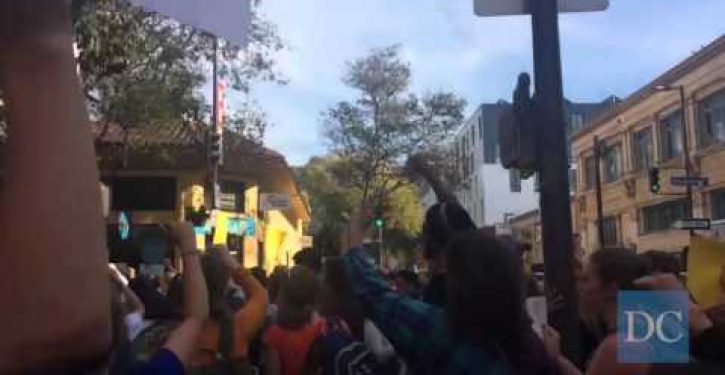 Let’s make it easy on the administration of Berkeley High School in Berkeley, Calif. If the perpetrator of the anti-black hate message found late last Wednesday on a computer in the Black Student Union is white, blink once. Otherwise, blink twice.

Actually, the powers that be have already blinked. By refusing to identify the race of the student, who has since confessed to the act, they are practically conceding he is not a person of pallor.

Steven Ahle of Conservative Firing Line provides the back story:

The Berkeley High School campus exploded after a message was found … [that] made reference to the KKK and said there would be a lynching on the campus on December 9th. The students, led by Principal Sam Pasarow, walked out of the school in protest over the racist missive and many comments were made as well by officials promising to find the perpetrator of the threat.

By Thursday, the guilty party had come forward to admit his crime. The Daily Californian adds:

The administration is now considering what disciplinary action will follow and has turned over evidence to Berkeley police, who will determine if there is any criminal charge. The student’s name will be kept confidential.

That is actually reasonable, not to mention in keeping with protocol, especially if the student is a minor.

It doesn’t mean, however, that his his race can’t be divulged.

But if the perpetrator is black, as the administration’s obfuscation seems to suggest, making this just another race hoax, then all of the angst and outrage are wasted. Wednesday night, after the message was discovered, leaders of the Black Student Union called on administrators to respond to what they described in predictably over-the-top language as a “blatant act of terrorism” against the black community. This was followed by an equally predictable list of demands to be met so that students of color could feel more safe.

This is all becoming a tiresome dance. The bottom line is that racism — directed both at and by blacks — remains a troubling reality in twenty-first century America. Jumping to conclusions and demonstrating every time another one of these incidents materializes does nothing to bridge the racial divide. The one thing it is sure to do is invite more of the same.

Meet the latest ‘truthers’ and read what they are saying about Ben Carson
Next Post
Cartoon of the Day: Where’s the dirt?