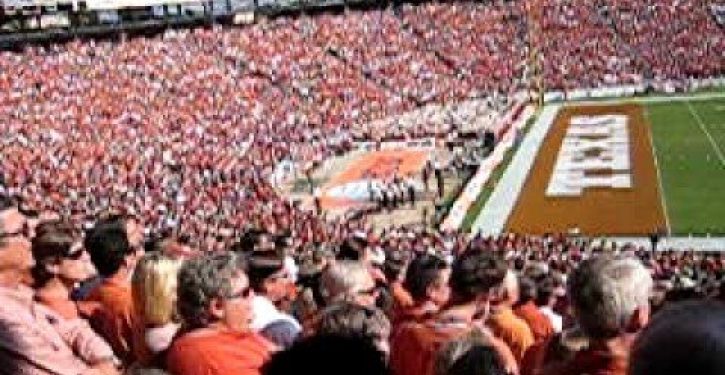 Nice as it would be to say “Who cares?” about last night’s football action, Washington did beat USC 17-12.  So it was very gratifying for some.  Imagine those silly coaches and sportswriters, ranking USC in the top 10 only a few weeks ago.

Indianapolis also prevailed over Houston, in spite of the Texans showing faint signs of life in the second half.

LU Nation has a special date for tonight (Friday), but all things in due course.

The University of Tulsa Golden Hurricane, which beat Notre Dame 28-27 on 30 October 2010, hosts Louisiana-Monroe Saturday afternoon, and actually gives 9.5, even after a rough couple of weeks.  The Warhawks are 1-3, but they did hold Alabama to 34 points on the 26th.

ULM head coach Todd Berry is an alumnus of the Tulsa coaching staff, and played his high school ball in Miami, Oklahoma (I know y’all are pronouncing “Mah-am-uh” correctly out there) – as so often happens in that neck of the woods.  Over the years, Berry also coached for (gack, spit) UNLV and USMA West Point, so he’s kind of a big piñata of tangential connections, LU Nation-wise.

#10 Oklahoma has vaulted into the top 10 for no good reason, and just in time to face Texas in the annual Red River Shootout: the game of games, the meet of meets, the crush to end all crushes.  Prejudicing the epic event further is the diabolical judgment of the oddsquad, which is jinxing the Sooners with a 16-point give.  Texas is really bad this year, but they’ll be playing the hardest they play all season, and the Oklahoma “offense” is still on a huge learning curve.  Look for Texas to cover.  Beware the upset.

11 AM Central, 9 AM Pacific in the Cotton Bowl.  Gustate early, in case there’s suffering – for either fan base – in the 4Q.  We’re going elegant here: no ketchup with the loaded-eggs brunch spread.

Because my Texas relatives are totally awesome, I’ll give Texas the B-52 flyover from 2008.  You haven’t lived until you’ve been in a stadium over which a low-flying B-52 Stratofortress is casting a giant shadow.  The Red River Shootout takes no prisoners, flyover-wise.

#21 Oklahoma State gets its crack at West Virginia, pride of the Big 12, in Morgantown this weekend.  The Mountaineers give 7.  We figure the Cowboys will slap themselves around with stupid errors in the first half, and then tighten up and suddenly act like they can see the other team on the field in the second.  What can I say, we’re just psychic that way.

As if the weekend needed to be huger, Navy will be at plummeting #15 Notre Dame for their annual, storied showdown.  The Arsh give 14, and that’s probably realistic, but we do give Navy a bank-shot for this one.  After all, Tulsa did it in 2010.

Army hosts Duke, and subsists on the short end of 12.5, which is also realistic even though Duke sucks this year.  Air Force heads to Wyoming for a Mountain West faceoff between two LU Nation faves.  With Wyoming at 0-5, the 2-2 Falcons will probably cover their give of 23.

Virginia Tech is our Friday night date, hosting NC State (motto: “They have a football team?”) and giving 3.  The Wolfpack built its 4-1 record on beating non-Power-5 schools and losing to Louisville; Tech can beat them, the question is just whether they will.  The Hokies really need a good jinx-breaking tonight. For more on tough-loving VT through this rough patch, see our old pal Mighty Fahvaag here.

Nevada, smarting from the rivalry loss last weekend, will be entertaining New Mexico in Reno on Saturday.  In an unusual twist, the 3-2 Lobos come in with the better record.  But Nevada, perennially the better program, gives 4.5.

TCU has soared, as expected, to #2, and heads off to play the Battle of the Big 12 Purple at Kansas State on Saturday.  Oddly enough, the Frogs are giving only 10 for this one.  We predict they’ll cover.  K-State still has a lot of work to do on defense, and TCU has been beating secondaries like the Tuesday wash on the clothesline.

New #7 LSU will be at South Carolina (motto: The Other USC) to face some Ole Ball.  Given the Gamecocks’ showing to date in 2015, the oddsdudes are high on the Tigers, awarding them a 20-point advantage.

Penn State, hosting Indiana for a Big X East showdown, gives 7.  Side note:  we liked it better when the Big X had the cheesy Leaders and Legends divisions.  Now the main “cool” factor lies in the fact that there are actually 14 of them.

New #3 Baylor isn’t likely to lose any momentum out of this week’s match with Kansas.  Bear give: 45.

New #4 Michigan State will be at Rutgers giving 13.5

Surging #5 Utah hosts Sudden Cal, which has now edged to #23.  We expect Cal’s loss column to gain one, and a for-real Utah to cover the 7-point give.  But Cal still has plenty of room to remain Sudden in the balance of the season.

New #6 Clemson is now #6 on the strength of beating Notre Dame, which granted the Tigers did vigorously and well, but this still shows how faddish and superficial the rankings can be.  Anyway, Clemson hosts Georgia Tech and gives 7.

The marquee slot on Saturday night is kind of a “Meh” this week, unless you’re a brand of Floridian.  #12 Florida State hosts Miami (Da U) for the cleverly named Florida State-Miami rivalry.  ‘Noles give 8.

Michigan, #18, will be looking to knock off #13 visiting Northwestern on the steady climb up the rankings ladder.  Wolverine give of 7 for the home stand.  New Mexico State will be at #14 Ole Miss for some reason, a first-time match-up for the two teams.  Just guess who’s giving.

In further rivalry action, Nebraska will host Wisconsin for one of those Storied Match-ups of Yesteryear.  Huskers give 1-ish, which sounds suspicious to us.

Further north, Central and Western Michigan meet to twiddle around on the field for a while, with the winner toting home the Victory Cannon.  We’re sure it’s fun for everybody, although the teams come in 2-3 and 1-3, respectively, and the “cannon” is a little bitty thing that sits on top of the trophy base.  (It’s not a contender like the massive Fremont Cannon in Nevada.)

Miami (OH) will be at Ohio for the annual Battle of the Bricks, which is named – hand to God – for the red brick buildings that so notably grace both campuses.  This not being the sort of thing respectable Ohio football fans would talk about much, there’s an eerie silence about it in the world of trash-bashing and undergrad hijinks.  Bobcats give 16.

#19 Georgia will be at Tennessee for their Storied Rivalry, and the main thing we can say is that one of them is ranked.  ‘Dogs give 3.  No interesting garage-sale junk on the line in the rivalry games this weekend, sad to say.

In FCS, McNeese State hosts Southeastern Louisiana U. in Lake Charles on Saturday evening.  The 3-1 Lions are all that and a bag of chips, currently ranked #17 to McNeese’s #13 in the FCS Coaches Poll.  Southeastern’s one loss was to Ohio.  Big Southland Conference match.  Clear and balmy, around 80, for the 6 PM start.

In Div III, Rose-Hulman (4-0) heads to Bluffton, OH to take on conference foe Bluffton U.  Bluffton is 2-2 and not at all terrible; it may be RHIT’s biggest test so far this season.  60s and partly cloudy for the 1:30 PM kickoff.

Christopher Newport, coming off the painful 14-9 loss to Rowan in the drenching from Joaquin last week, heads to Union, NJ to take on Kean U. on Saturday, at noon Eastern.  Kean is 3-1 to CNU’s 1-3.  Game weather should be mild, overcast and in the 60s.

Merchant Marine, now 1-3, heads to Rochester, NY for conference play with Rochester U.  The Yellowjackets are 3-1.  Rochester has the distinction of being the alma mater of George Eastman, of Eastman Kodak fame, as well as of soprano Renee Fleming and actor Robert Forster.  50s and fair for the 1 PM kickoff.

In the afternoon slot, the Cowboys will have homefield advantage, but little else, hosting the Patriots (-10).

Broncos at Raiders are giving 4.5.

Niners at Giants (-7, for some reason) should be good fun on Sunday night.

We note that the deeply silly NFC East is operating true to form, with the imploding Cowboys in the lead and everyone 2-2 or worse at this point.  It’s a nice picture of how socialism works, in fact.

Steelers at Chargers get the Monday night feature, with the Bolts giving a reasonable 3.  Pittsburgh is in the 2-2 club, but we can at least say that Denver is 4-0. 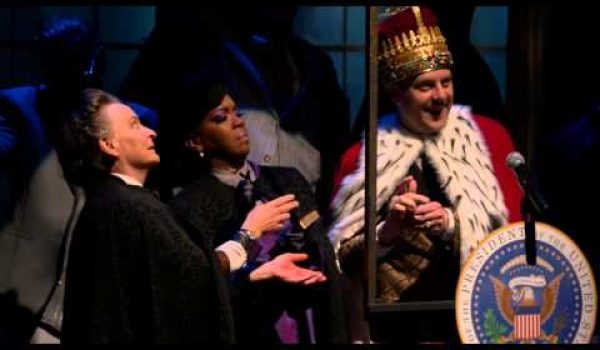 Video: Fed. govt. funds play about gay president who fights zombies in WH
Next Post
Why should we WANT to preserve the status quo in House politics?