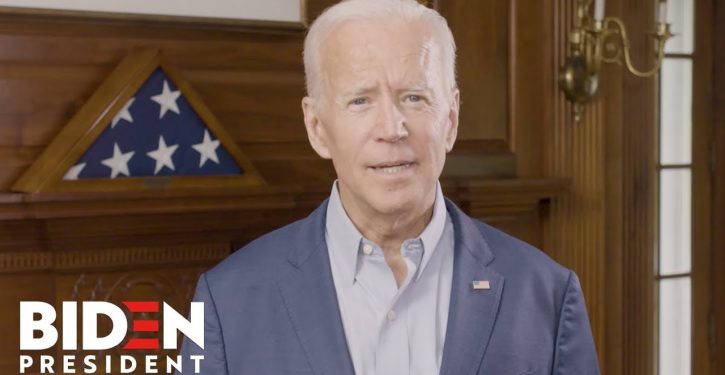 It’s one thing to forget which city you’re touring in, quite another to think your kid had Eric Holder and Loretta Lynch’s old job.

This short clip doesn’t give any hints explaining why Beau Biden’s CV came up in conversation, but the former Vice President really isn’t making the case that he’s got it all together as a candidate for the chair behind the Big Desk.

His eldest son was AG in his home state of Delaware. It is by no means an insignificant accomplishment. Yet, it’s a long way off from what Joe is saying in this clip:

In Las Vegas, @JoeBiden talks about his deceased son Beau, who "was the attorney general of the United States." pic.twitter.com/rifoCir7uw

You’d think that this guy would have at least one close friend or family member out there willing to tell him the uncomfortable truth that he hasn’t got what it takes to do this job, even if by some stroke of luck (good for him, and disastrous for the country) he somehow got dropped into the White House.

But maybe the money to be made by those closest to him has blinded them to all good sense. Maybe they’re more interested in their own personal gravy trains than they are either in the good of a nation that would depend on this disoriented gaffe machine interacting with foreign heads of state in the delicate dance of diplomacy.

Ex-U.S. envoy to Ukraine Marie Yovanovitch inks book deal
Next Post
Warren lays 50/50 odds Trump will be too scared to debate her