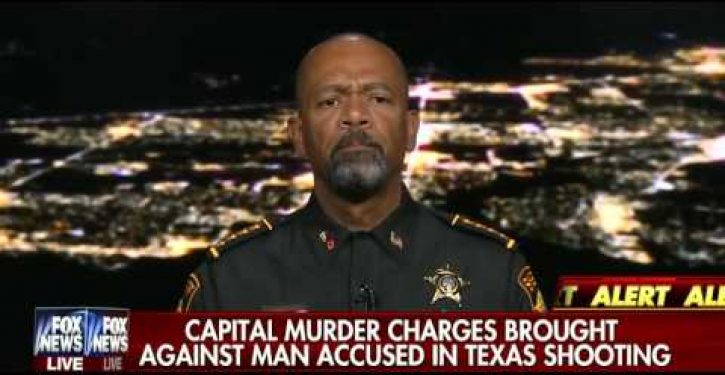 The suspect in Friday night’s brutal execution-style murder of a police deputy in Harris County, Texas, has been identified. He is 30-year-old Shannon J. Miles, and he has been charged with capital murder in the death of 47-year-old deputy Darren H. Goforth.

According to local station KBTX, Miles has a history of arrests. The station also reports that authorities “are not sure of the motive,” which sounds like the politic thing to say, even though Harris County Sheriff Ron Hickman was unambiguous in his assertion Saturday that the anti-police rhetoric in the  nation “has gotten out of control.” One can hardly call the sheriff’s statement circumspect, but his Milwaukee counterpart, Sheriff David Clarke, an outspoken critic of the Obama administration, fixed blame for the shooting at the president’s feet:

So where do we go from here? By way of an answer, consider that hours after the report of Deputy Goforth’s assassination had gone out in the media, Black Lives Matter protesters marched on the Minnesota state fair, chanting “Pigs in a blanket, fry ’em like bacon.” The demonstration, which was advertised on Twitter under the hashtag #BlackFair, was recorded for posterity:

You can bank on two things: First, the mainstream media will play down the race angle of this story as much as they played up that angle in the deaths of Freddie Gray, Michael Brown, et. al. Second, so-called black leaders, including Al Sharpton, will remain as silent as corpses.

Something tells me this will not end well for anyone.

‘LGBT’ graphic-novel flap at Duke: Why ‘P.C.’ itself shuts down our minds
Next Post
The $15 minimum wage battle spreads to Florida