With the general election 15 months away and Hillary Clinton’s campaign continuing to falter, the Democrats are busy doing outreach to all the prospective voters they can find. They are even attempting to court the largely monolithic bloc comprised by military veterans, most of whom vote Republican.

Judging from the DNC’s recent efforts, they are going to have to try harder. A page from the their website devoted to “Veterans and Military Families” recently ran a photo of the commander-in-chief shaking hands with aging soldiers. The purpose was to emphasize the Democrats’s unwavering commitment to the treatment of our men and women in uniform. There’s just one small problem with the picture. See if you can find it.

If those don’t look like uniforms worn by any branch of America’s military, it’s because they aren’t. As the Military Times explains, the photo, taken in 2011 by White House photographer Pete Souza, was of Obama greeting Polish war veterans in Warsaw.

“While largely harmless,” the Times article notes, “the error points to a common complaint among U.S. veterans groups about the lack of knowledge of many Americans about military life, tradition and challenges.”

The photo has since been scrubbed from the DNC website — which is a start. Now if only this administration could do something to improve the lot of veterans in need of medical care at one of the Veterans Administration’s facilities, we’d really be getting somewhere. A report leaked by the Washington Post in July found that a third of veterans die while waiting for health care. Or consider the case of Ted Koran, a U.S. Air Force veteran, who called a veterans’ suicide hotline … and was placed on hold. 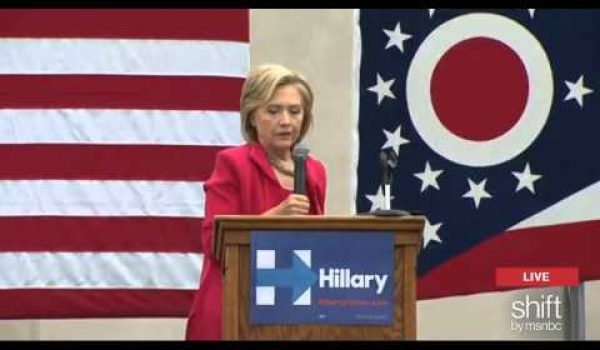 More word association: What word does Hillary most associate with pro-lifers?
Next Post
The nation’s worst state attorneys general revealed