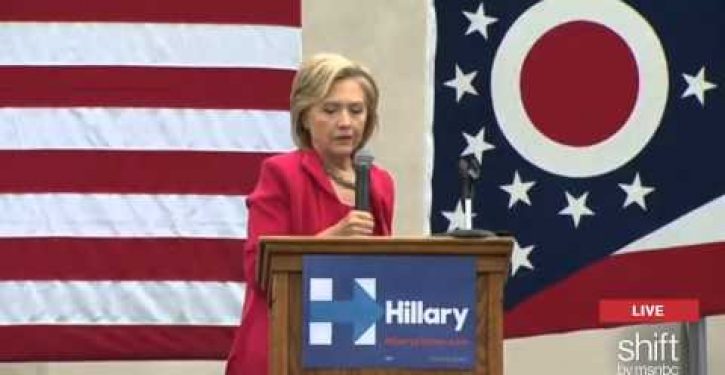 As was noted yesterday, a Quinnipiac poll asked voters to play word association, telling what word came most to mind in connection with the name Hillary Clinton. The most common answer was liar.

It turns out Hillary is doing a little word associating herself on the campaign trail. Under the guise of defending women from the war purportedly waged on them by Americans who oppose abortion, Clinton called her fellow citizens terrorists while stumping in Ohio, adding:

What makes all of this so utterly pathetic is that it comes on the heels of the videos recently released that show the nonchalance with which Planned Parenthood higher-ups discuss ending human lives. The truth of the matter is that those who seek to defund Planned Parenthood are the ones trying to save lives while Clinton and her ilk are trying to end them.

Clinton’s assault on pro-lifers is a desperation measure as her following continues to crater. As though calling conservatives terrorists weren’t bad enough, she even a stole a line from one of them — from Marco Rubio, who said during the announcement of his candidacy, “We are going forward, we are not going back.”

Boston U. prof’s apology for THIS practice by ISIS will blow your mind
Next Post
Image of the Day: Do these look like U.S. military veterans to you? They do to the DNC