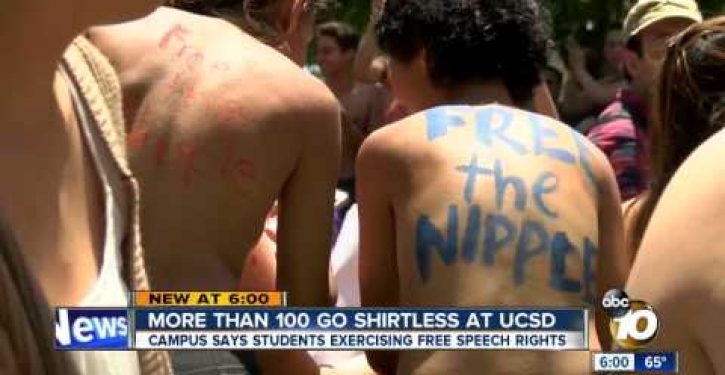 According to the calendar, protesters at the University of California San Diego are either two months late or ten months early. Annual Free the Nipple Day, as noted previously at LU, is held March 26. Nevertheless, San Diego ABC affiliate KGTV reports:

Armed with a message — but no tops — more than 100 students at UC San Diego gathered Wednesday with this message: “Free the Nipple.”

“Yes, I just want everyone to learn to love themselves and love other people, too, so the world can be a better place,” said Anni Ma of Free the Nipple UCSD, who helped organize the event on campus.

The purpose, Ma explained, is to “normalize the female breast”:

It’s just not fair that a woman will get harassed and then get put in jail and then have to fight to prove her innocence while her counterpart will have no problem with doing that. It’s kind of rough and it’s just not fair.

“It doesn’t have to be a sexual thing,” Ma went on to tell reporters, but maybe she should do an informal survey of men, who tend to be aroused by the sight of a female breast. Even the staunchest male supporters of equality, which Ma claims this is fundamentally about, might find it … er — hard to curb their enthusiasm when women parade around, letting it all hang out.

KGTC notes that nudity in public spaces violates both San Diego municipal code and the UCSD student code of conduct, but the university, which supports the movement, said that forcing the students to cover up would violate their First Amendment rights.

Neither Adam nor Eve could be reached for comment.

Federal court rules that pro-life views are ‘patently offensive’
Next Post
State Dept. knew of a threat against U.S. officials in Benghazi one year before attacks