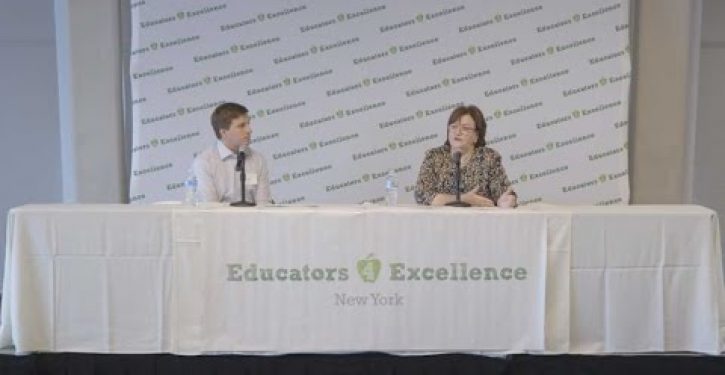 Newly minted state Education Commissioner has prepared for battle with parents and teachers who support opting students out of Common Core, repeatedly insinuating that they are simply ignorant and even threatening legal action.

MaryEllen Elia recently gave a keynote address to a conference held by Educators 4 Excellence, in which she described the need to educate people who support the opt out movement on why it is such a good thing.

Here are several statements in which she opines about parental ignorance on Common Core (emphasis added):

So let me say this very clearly. I think opt out is something that is not reasonable. …

I don’t agree with opt out. I will, uh, and am moving forward to do everything I can so that we can make sure that we don’t have our opt out in any way grow and in fact when people I think become more aware of the importance of having the assessments…

You can watch video of her speech here.

See, it isn’t that Common Core is a dysfunctional system of arbitrary measurement of academic achievement, it’s that parents and students simply don’t know what’s good for them.

Elia also spoke of “ramifications” for the opt out movement.

“There are ramifications that can occur,” she warned.  “I’m not saying what will occur, I’m just saying there are.”

Today, the Education Commissioner expanded on that threat, demanding “Listen, it’s the law.”  And to enforce that law, Elia is assembling a legal team.

Education commissioner MaryEllen Elia already has begun a battle to stop the rapidly growing opt-out movement before next year’s state tests, reaching out to department attorneys and meeting with superintendents, she told POLITICO New York.

“We’re trying to pull together a tool kit, if you will, to support superintendents in how we can communicate in a much more effective way to people across the state,” Elia said.

That kit will include legal information, which is why she has reached out to lawyers, Elia said.

“I want the superintendents to understand the reflections and law that they can use as an information piece when they talk to people in their community … It’s important for them to be able to say, ‘Listen, it’s the law.’”

The commissioner’s desire to “educate” parents on the joy of Common Core didn’t please one parent.

Some parents, like Jessica McNair, say they already are informed about Common Core and the opt-out movement should not be dismissed as a lack of information.

McNair hinted that perhaps Elia needs some education of her own.

“I think she has a lot to learn about the parents in New York State,” McNair said. “We’re not going to back down until we see tests that are developmentally appropriate, and tests that are decoupled from the teacher evaluations.”