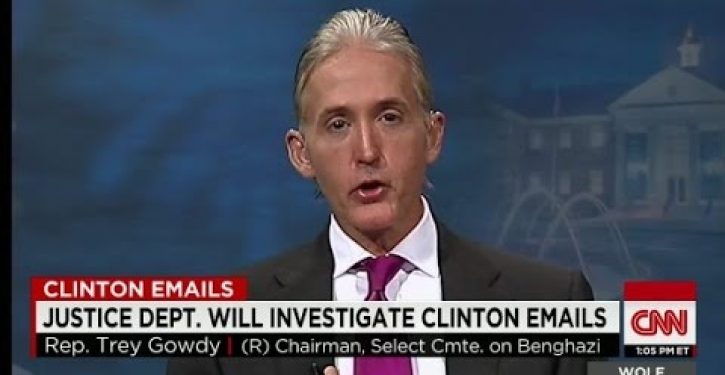 Rep. Trey Gowdy (R-S.C.) has long been a favorite among grassroots conservatives because of his willingness to go mano a mano with his political opponents.

Now that includes Hillary Clinton. On Tuesday Gowdy went on both CNN and Fox News to discuss the fact that the FBI was finally getting its hands on Clinton’s email server, and he made no bones about the fact that he believes this should have happened a long time ago.

Every explanation Secretary Clinton has provided about a week later was proven to be demonstrably false. This is just the latest one of those assertions that there was no classified info. I saw the clip this morning. she was very definitive – she neither sent or received classified information. Well, that is patently false. What I’m primarily concerned with is whether or not I’m going to have access to records that I need to do the job that the House asked me to do….

If she were interested in cooperation she wouldn’t have done any of the things she’s done to date. This was not about cooperation, and Bill, frankly, it’s not about convenience, it’s about control. She wanted to control access to the public record, and she almost got away with it but she didn’t.

And then he told CNN that it was “about damn time” that she turned in the email server!

Cartoon of the Day: Green-on-black crime
Next Post
5 reasons why Kasich-Rubio is the right ticket for 2016