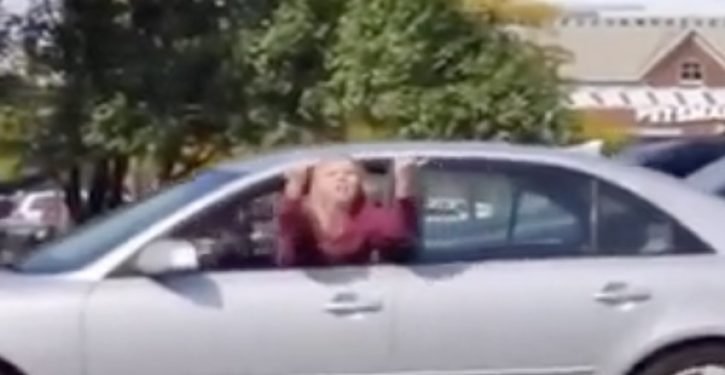 File this one under Karma for Trump-haters. This is pretty funny unless you are the likely Biden voter with an extreme case of TDS who was driving the silver sedan. The driver of the black SUV in front of hers, which was rear-ended, probably isn’t laughing either.

The unidentified woman, who was inching along in slow traffic, began flipping the bird with two hands at a Trump rally on the same street. She became so absorbed in giving childish vent to her rage that at one point she hung out the driver’s-side window, scarcely aware that he car was drifting forward until she rammed into the vehicle in front of her. Unluckily for her, a police cruiser was a few cars behind hers, and the officers inside witnessed the whole event.

Happily there were no injuries unless you count the woman’s bruised ego or her checkbook. She committed a moving violation, which means the amount of the summons was probably hefty.

Below is a video of the entire hilarious encounter. It’s OK to laugh since no one got hurt.

KARMA IS A BITCH !!!
Biden supporter gets triggered over TRUMP street corner rally and causes a fender bender in front of the POLICE 😂😂😂
TRUMP 2020 pic.twitter.com/39oZB3r5qL

Notice that after the woman hits the car in front of her, she shakes her fist at the person in the car she hit.