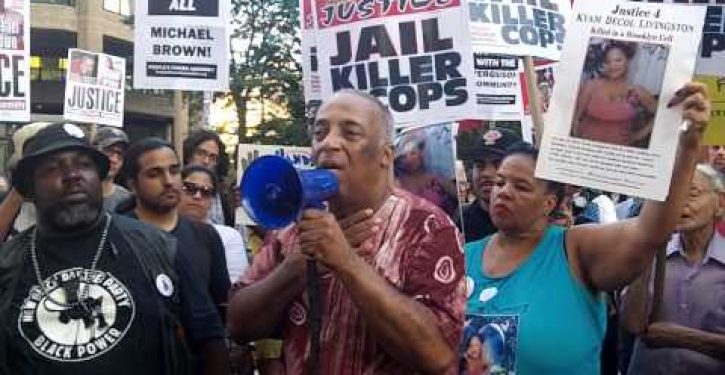 Charles Barron, a self-described member of the Black Panther Party, and current Democratic Assemblyman, is strongly considering a run for the New York Senate.

Barron has been urged by supporters to run for the vacancy left by former Senator John Sampson, who was recently convicted of lying to federal agents and could face twenty years in prison.

… Mr. Barron insisted he was waiting a few days to make a decision “out of respect” for Mr. Sampson’s family, but said his political organization, Operation P.O.W.E.R., urged him to get in the race last night.

“We did not want to be like political sharks,” Mr. Barron told the Observer this morning. “The organization wanted me to consider running and I told them that I would, that I would make a definite decision either by the end of this week or by the very beginning of next week.”

If Barron’s admiration for and affiliation with the Black Panthers isn’t sufficient evidence of his racist male fides, he said at a 2002 rally to demand reparations for blacks:

I want to go up to the closest white person and say, ‘You can’t understand this, it’s a black thing,’ and then slap him just for my mental health.

More recently, he threatened to bring Ferguson-style riots to the streets of New York, telling an already emotionally animated crowd that “riots is [sic] the voice of the unheard.”

Then there is his loathing of Israel and his support of dictators. After winning his election for his Assembly seat in 2014, Barron lured Zimbabwe’s repressive President Robert Mugabe to Albany for a visit.

Mugabe has instituted a regime willing to “commit assault, torture, rape, extralegal evictions and executions without fear of punishment.” Barron referred to Mugabe as a “freedom fighter.”

Barron has also frequently expressed great admiration for other world dictators, explaining that “all my heroes were America’s enemies.”

He remains a shining example of the kind of deplorable individuals voters put into office in the state of New York.

The special election for Sampson’s seat will likely be held in November, and Barron is considering a third party run.